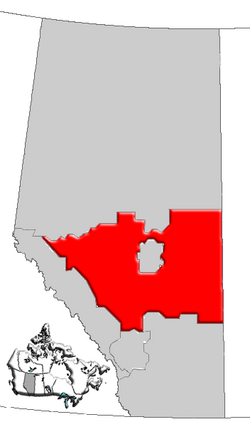 Central Alberta is a region located in the Canadian province of Alberta.

Central Alberta is the most densely populated rural area in the province. Agriculture and energy are important to the area's economy.

Central Alberta is bordered by the Canadian Rockies in the west, Southern Alberta and the Calgary Region to the south, Saskatchewan to the east and Northern Alberta to the north. It completely surrounds the Edmonton Capital Region and contains the central part of the heavily populated Calgary-Edmonton Corridor.

A series of roadside attractions known as the Giants of the Prairies can be found in Central Alberta. Large mushrooms in Vilna, giant Perogy (Ukrainian dumpling) in Glendon, huge Kubasa (Ukrainian garlic sausage) in Mundare, large Pysanka (Ukrainian easter egg) in Vegreville, a UFO Landing Pad in St. Paul and a giant duck in Andrew.

All content from Kiddle encyclopedia articles (including the article images and facts) can be freely used under Attribution-ShareAlike license, unless stated otherwise. Cite this article:
Central Alberta Facts for Kids. Kiddle Encyclopedia.