Rocky Mountain House is a town in west-central Alberta, Canada located approximately 77 km (48 mi) west of the City of Red Deer at the confluence of the Clearwater and North Saskatchewan Rivers, and at the crossroads of Highway 22 (Cowboy Trail) and Highway 11 (David Thompson Highway). The surrounding Clearwater County's administration office is located in Rocky Mountain House. 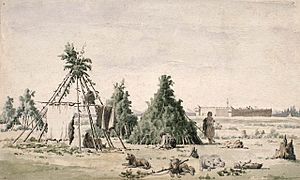 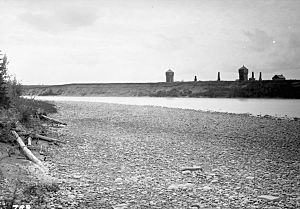 The town has a long history dating to the 18th century with the presence of British and Canadian fur traders during the westward Canadian expansion. In 1799, the Hudson's Bay Company and the North West Company each established the Rocky Mountain House and Acton House fur trading posts. Trade with the local aboriginal peoples continued until 1821 when the companies merged, they continued to trade until 1875 and closed the Rocky Mountain House post. The name of the settlement however remained.

The Rocky Mountain House settlement also served as a launching point for many explorers such as David Thompson, in search for a passage west to the Pacific Ocean. Many travellers used this location as a stop on their way further west or northwest, just as they do into the 21st century.

The next wave of adventurers entered the region at the beginning of the 20th century in search of opportunities presented by lush farmland and the abundance of natural resources. Rocky Mountain House became a firmly established town by 1912. Settlers of Scandinavian origin made up a significant part of early 20th century settlement in the region.

The posts were built at the confluence of the Clearwater River and the North Saskatchewan River. They were on the north bank just above the Clearwater and strongly built for protection from the Blackfeet. During low water there were rapids near the post. Around 1980, only two stone chimneys were standing. An interpretive centre was subsequently developed at this location.

Rocky Mountain House has a subarctic climate (Köppen climate classification Dfc) that borders on a humid continental climate (Köppen Dfb). Daytime temperatures are in general representative for the latter, but the larger diurnal temperature variation with the high elevation ensures frequent frosts. The January average high of around −4 °C (25 °F) is actually much milder than clear continental areas further east in Canada on similar and lower parallels.

On the road, Rocky Mountain House is served by Highway 22 and Highway 11.

In the air, Rocky Mountain House is served by its airport.

All content from Kiddle encyclopedia articles (including the article images and facts) can be freely used under Attribution-ShareAlike license, unless stated otherwise. Cite this article:
Rocky Mountain House Facts for Kids. Kiddle Encyclopedia.