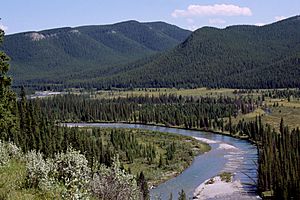 The Clearwater River of southwestern Alberta

Clearwater is a river of southern Alberta, Canada. Situated entirely in the Canadian Rockies and the Rocky Mountain foothills of Alberta, it is a glacier fed upper reach tributary of the North Saskatchewan River. The upper reach of the Clearwater has become popular for equestrian travelers due to the natural setting along the river.

When measuring from Trident Lake, the Clearwater River has a length of 203 kilometres (126 mi) and descends 350 metres (1,150 ft) to its end at Rocky Mountain House.

All content from Kiddle encyclopedia articles (including the article images and facts) can be freely used under Attribution-ShareAlike license, unless stated otherwise. Cite this article:
Clearwater River (Alberta) Facts for Kids. Kiddle Encyclopedia.