Westlock is a town in central Alberta, Canada. Founded in 1913, the town is primarily an agricultural, business, and government administration centre serving communities and rural areas within surrounding Westlock County.

Westlock lies on the Alberta plain, one of the Great Plains. It lies just to the north of the continental divide between the Athabasca and North Saskatchewan river basins, and to the east of the Pembina River, a tributary of the Athabasca. The town is about 670 metres (2,200 ft) above mean sea level. Westlock sits within the humid continental climate zone, on the northern edge of the aspen parkland belt, a once heavily treed region that was cleared for agriculture at the turn of the 20th century. It is a relatively fertile region of dark soils. To the north lies the subarctic climate zone. The mean annual precipitation averaged from one meteorological station within the county measured 468 millimetres (mm), based on data from 1980 to 1990. The mean annual temperature averaged 1.9 °C, with the mean monthly temperature reaching a high of 16.8 °C in July, and dropping to a low of -11.4 °C in January.

Prior to European settlement, the area around Westlock was inhabited by First Nations people, notably the Cree. Although the fur trade had been active in Alberta since 1754 when Anthony Henday explored the area, the Westlock district was not mentioned in writing until David Thompson came through in April 1799. 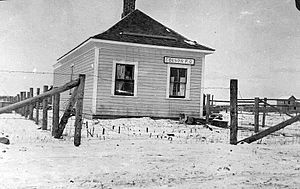 White settlement did not begin until 1902 at that time centred on a rural community about 5 km (3.1 mi) east of present-day Westlock. The founding family was named Edgson, but this was considered too hard to pronounce. Edson, Alberta already existed, so the site was called Edison by its Irish-Canadian founders, after the American inventor Thomas Edison. The community in 1912 consisted of a total of no more than 13 buildings: a harness shop, a blacksmith shop, several homes, two churches, and one family living in a tent. There was also a post office but this was closed in 1911 when Conservative Party came to power and fired many Liberals from the postal service. In 1911 the railway reached nearby Clyde to the east, and in 1912 the E.D. & B.C. Railway (later the Northern Alberta Railway, now part of CN) mapped a new townsite where Westlock now stands to the west. Edison was now caught between the two. In 1914, the Methodist church building was picked up and moved down the road to Westlock, an indication of the new settlement's ascendancy over the older one.

The name of the new town came from two a combination of two men, William Westgate and William Lockhart, who owned the property. Westlock was incorporated as a village on 16 March 1916, with a population of 65 residents. The first reeve was George MacTavish, and in that same year, the first grain elevator was built. The first bank branch, the Merchant's Bank opened its doors in 1918. A permanent brick schoolhouse was built in 1925. The Sisters of Charity of St. Vincent de Paul of Halifax operated a hospital out of a former house in 1927, and a purpose-built hospital, the Immaculata, was opened in 1928. Westlock became a town on 7 January 1947 with a population of 854. That same year, the Memorial Hall was also built.

In 1992 the Memorial Hall burned down, later to be replaced. In 1995, the hospital was replaced by the Westlock Health Care Centre, a somewhat controversial decision because several other communities in Alberta were facing hospital closures at the time. In 1997, the old hospital was demolished.

NB The following sections present select demographic statistics arising out of the Canada 2006 Census. Population and dwelling unit figures presented within are rounded to the nearest multiple of 5 by Statistics Canada.

Westlock had 2,060 private dwellings occupied by usual residents in 2006. 74.8% of the occupied housing in the town was single-detached (the average in Alberta was 63.4%), while 17.7% were apartments in buildings with fewer than five storeys (14.7% in Alberta as a whole).

In 2006, there were 3,945 people who claimed English as their mother tongue, 125 who chose French, and 10 who indicated both. In addition, 600 claimed another language (besides English and French) as a mother tongue. Every person in town claimed at least a working knowledge of English, 4,450 said it was their only language, 220 said they also knew French, not one person was unilingually Francophone.

Of the population only 385 were immigrants, the majority of those (300) having arrived in Canada before 1991. All but 55 people were Canadian citizens. Most of the Canadian-born residents were from third generation or more (2,470), or the second generation (955).

There were 310 people who had Aboriginal identity. There were 145 who reported being visible minorities.

The total workforce was 2,155 people. The most common occupations were in sales and service (660) and trades, transport and equipment operation (410). The most common industries were other services (360), health care and social services (355), and retail trade (320).

Most people claimed to work in Westlock, and only (255) indicated working in another municipality. The majority (1,485) of those that had a regular workplace that was not their own home (1,950) commuted to work by private automobile.

All content from Kiddle encyclopedia articles (including the article images and facts) can be freely used under Attribution-ShareAlike license, unless stated otherwise. Cite this article:
Westlock Facts for Kids. Kiddle Encyclopedia.