The Cree (Cree: Néhinaw, Néhiyaw, etc; French: Cri) are one of the largest groups of First Nations in North America.

In Canada, over 350 000 people are Cree or have Cree ancestry.. The major proportion of Cree in Canada live north and west of Lake Superior, in Ontario, Manitoba, Saskatchewan, Alberta and the Northwest Territories. About 27 000 live in Quebec.

In the United States, Cree people historically lived from Lake Superior westward. Today, they live mostly in Montana, where they share the Rocky Boy Indian Reservation with Ojibwe (Chippewa) people.

The documented westward migration over time has been strongly associated with their roles as traders and hunters in the North American fur trade.

The Cree were first contacted by Europeans in 1682, at the mouth of the Nelson and Hayes rivers in what is now northern Manitoba, by a Hudson's Bay Company (HBC) party traveling about 100 miles (160 km) inland. In the south, contact was later. In 1732 in what is now northwestern Ontario, Pierre Gaultier de Varennes, sieur de La Vérendrye, met with an assembled group of 200 Cree warriors near present-day Fort Frances, as well as with the Monsoni, (a branch of the Ojibwe). Both groups had donned war paint in preparation to an attack on the Dakota and another group of Ojibwe.

After acquiring firearms from the HBC, the Cree moved as traders into the plains, acting as middlemen with the HBC.

The Cree are generally divided into eight groups based on dialect and region. These divisions do not necessarily represent ethnic sub-divisions within the larger ethnic group:

Due to the many dialects of the Cree language, the people have no modern collective autonym. The Plains Cree and Attikamekw refer to themselves using modern forms of the historical nêhiraw, namely nêhiyaw and nêhirawisiw, respectively. Moose Cree, East Cree, Naskapi, and Montagnais all refer to themselves using modern dialectal forms of the historical iriniw, meaning 'man.' Moose Cree use the form ililiw, coastal East Cree and Naskapi use iyiyiw (variously spelled iiyiyiu, iiyiyuu, and eeyou), inland East Cree use iyiniw (variously spelled iinuu and eenou), and Montagnais use ilnu and innu, depending on dialect. The Cree use "Cree," "cri," "Naskapi, or "montagnais" to refer to their people only when speaking French or English. 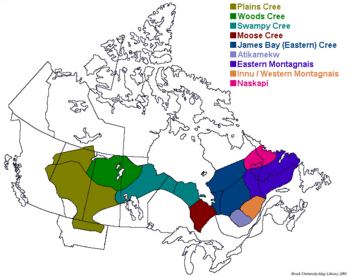 The linguistic subdivisions and geography of the Cree 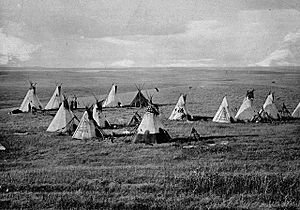 Nēhiyaw camp near Vermilion, Alberta, in 1871

As hunter-gatherers, the basic unit of organization for Cree peoples was the lodge, a group of perhaps eight or a dozen people, usually the families of two separate but related married couples, who lived together in the same wigwam (domed tent) or tipi (conical tent), and the band, a group of lodges who moved and hunted together. In the case of disagreement lodges could leave bands, and bands could be formed and dissolved with relative ease, but as there is safety in numbers, all families would want to be part of some band, and banishment was considered a very serious punishment. Bands would usually have strong ties to their neighbours through intermarriage and would assemble together at different parts of the year to hunt and socialize together. Besides these regional gatherings, there was no higher-level formal structure, and decisions of war and peace were made by consensus with allied bands meeting together in council. People could be identified by their clan, which is a group of people claiming descent from the same common ancestor; each clan would have a representative and a vote in all important councils held by the band (compare: Anishinaabe clan system).

Each band remained independent of each other. However, Cree-speaking bands tended to work together and with their neighbours against outside enemies. Those Cree who moved onto the Great Plains and adopted bison hunting, called the Plains Cree, were allied with the Assiniboine and the Saulteaux in what was known as the "Iron Confederacy" which was a major force in the North American fur trade from the 1730s to the 1870s. The Cree and the Assiniboine were important intermediaries in the Indian trading networks on the northern plains.

When a band went to war, they would nominate a temporary military commander, called a okimahkan. loosely translated as "war chief". This office was different from that of the "peace chief", a leader who had a role more like that of diplomat. In the run-up to the 1885 North-West Rebellion, Big Bear was the leader of his band, but once the fighting started Wandering Spirit became war leader.

There have been several attempts to create a national political organization that would represent all Cree peoples, at least as far back as a 1994 gathering at the Opaskwayak Cree First Nation reserve.

The name "Cree" is derived from the Algonkian-language exonym Kirištino˙, which the Ojibwa used for tribes around Hudson Bay. The French colonists and explorers, who spelled the term Kilistinon, Kiristinon, Knisteneaux, Cristenaux, and Cristinaux, used the term for numerous tribes which they encountered north of Lake Superior, in Manitoba, and west of there. The French used these terms to refer to various groups of peoples in Canada, some of which are now better distinguished as Severn Anishinaabe (Ojibwa), who speak dialects different from the Algonquin.

Depending on the community, the Cree may call themselves by the following names: the nēhiyawak, nīhithaw, nēhilaw, and nēhinaw; or ininiw, ililiw, iynu (innu), or iyyu. These names are derived from the historical autonym nēhiraw (of uncertain meaning) or from the historical autonym iriniw (meaning "person"). Cree using the latter autonym tend to be those living in the territories of Quebec and Labrador. 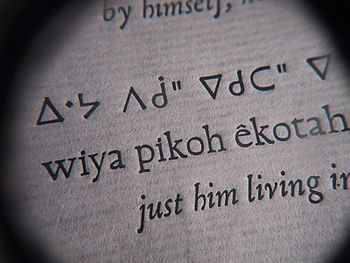 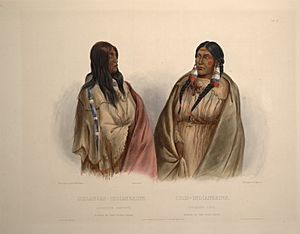 The Cree language (also known in the most broad classification as Cree-Montagnais, Cree-Montagnais-Naskapi, to show the groups included within it) is the name for a group of closely related Algonquian languages spoken by approximately 117,000 people across Canada, from the Northwest Territories to Labrador. It is the most widely spoken aboriginal language in Canada. The only region where Cree has official status is in the Northwest Territories, together with eight other aboriginal languages.

The two major groups: Nehiyaw and Innu, speak a mutually intelligible Cree dialect continuum, which can be divided by many criteria. In a dialect continuum, "It is not so much a language, as a chain of dialects, where speakers from one community can very easily understand their neighbours, but a Plains Cree speaker from Alberta would find a Quebec Cree speaker difficult to speak to without practice."

One major division between the groups is that the Eastern group palatalizes the sound to either (c) or to (č) when it precedes front vowels. There is also a major difference in grammatical vocabulary (particles) between the groups. Within both groups, another set of variations has arisen around the pronunciation of the Proto-Algonquian phoneme *l, which can be realized as or (th) by different groups. Yet in other dialects, the distinction between (ē) and (ī) has been lost, merging to the latter. In more western dialects, the distinction between and (š) has been lost, both merging to the former. Cree is a not a typologically harmonic language. Cree has both prefixes and suffixes, both prepositions and postpositions, and both prenominal and postnominal modifiers (e.g. demonstratives can appear in both positions).

Golla lists Cree as one of 55 languages that have more than 1,000 speakers which are being actively acquired by children. 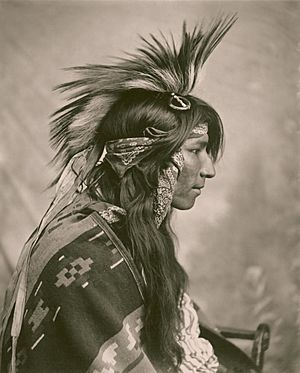 Given the traditional Cree acceptance of mixed marriages, it is acknowledged by academics that all bands are ultimately of mixed heritage and multilingualism and multiculturalism was the norm. In the West, mixed bands of Cree, Saulteaux and Assiniboine, all partners in the Iron Confederacy, are the norm. However, in recent years, as indigenous languages have declined across western Canada where there were once three languages spoken on a given reserve, there may now only be one. This has led to a simplification of identity, and it has become "fashionable" for bands in many parts of Saskatchewan to identify as "Plains Cree" at the expense of a mixed Cree-Salteaux history. There is also a tendency for bands to recategorize themselves as "Plains Cree" instead of Woods Cree or Swampy Cree. Neal McLeod argues this is partly due to the dominant culture's fascination with Plains Indian culture as well as the greater degree of written standardization and prestige Plains Cree enjoys over other Cree dialects.

The Métis (from the French, Métis - of mixed ancestry) are people of mixed ancestry, such as Nehiyaw (or Anishinaabe) and French, English, or Scottish heritage. According to Aboriginal Affairs and Northern Development Canada, the Métis were historically the children of French fur traders and Nehiyaw women or, from unions of English or Scottish traders and northern Dene women (Anglo-Métis). Generally in academic circles, the term Métis can be used to refer to any combination of persons of mixed Native American and European heritage, although historical definitions for Métis remain. Canada's Indian and Northern Affairs broadly define Métis as those persons of mixed First Nation and European ancestry, while The Métis National Council defines a Métis as "a person who self-identifies as Métis, is distinct from other Aboriginal peoples, is of historic Métis Nation Ancestry and who is accepted by the Métis Nation". 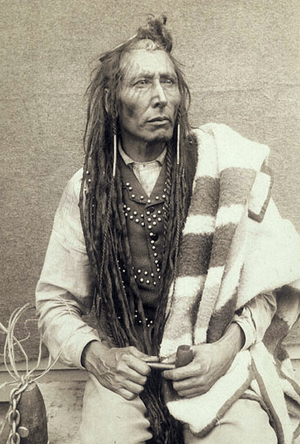 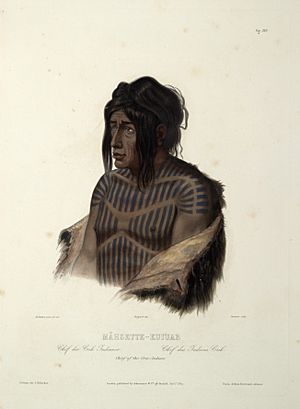 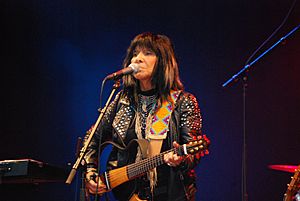 All content from Kiddle encyclopedia articles (including the article images and facts) can be freely used under Attribution-ShareAlike license, unless stated otherwise. Cite this article:
Cree Facts for Kids. Kiddle Encyclopedia.