The Chipewyan (Denésoliné or Dënesųłı̨né or Dënë Sųłınë́, meaning "the original/real people") are an aboriginal Dene ethnolinguistic group of the Athabaskan language family, whose ancestors are identified with the Taltheilei Shale archaeological tradition. They are part of the Northern Athabascan group of peoples, and come from what is now Western Canada.

The French-speaking missionaries to the northwest of the Red River Colony referred to the Chipewyan people as Montagnais in their documents written in French. Montagnais (in French) therefore has often been mistakenly translated to Montagnais (in English), which refers to the Neenolino Innu of northern Quebec, and not the Dene (Chipewyan people). 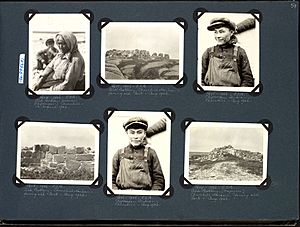 Album with photos of Chipewyan woman and boy

Chipewyan peoples live in the region spanning the western Canadian Shield to the Northwest Territories, including northern parts of the provinces of Manitoba, Alberta and Saskatchewan. There are also many burial and archaeological sites in Nunavut which are part of the Dënesųłı̨ne group.

There are also many Dene (Dënesųlı̨ne)-speaking Métis communities located throughout the region. The Saskatchewan village of La Loche, for example, had 2,300 residents who in the 2011 census identified as speaking Dene (Denesuline) as their native language. About 1,800 of the residents were Métis and about 600 were members of the Clearwater River Dene Nation.

The relocation of the Sayisi Dene is commemorated in the Dene Memorial in Churchill Manitoba. 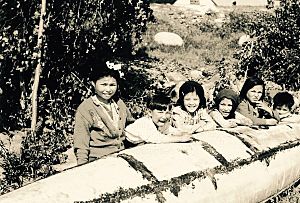 Historically, the Denesuline were allied to some degree with the southerly Cree, and warred against Inuit and other Dene peoples to the north of Chipewyan lands.

An important historic Denesuline is Thanadelthur ("Marten Jumping"), a young woman who early in the 18th century helped her people to establish peace with the Cree, and to get involved with the fur trade (Steckley 1999).

The Sayisi Dene of northern Manitoba is a Chipewyan band notable for hunting migratory caribou. They were historically located at Little Duck Lake and known as the "Duck Lake Dene". In 1956, the government relocated them to the port of Churchill on the shore of Hudson Bay and a small village north of Churchill called North Knife River, joining other Chipewyan Dene and becoming members of "Fort Churchill Dene Chipewyan Band". In the 1970s, the "Duck Lake Dene" opted for self-reliance, a return to caribou hunting, and relocated to Tadoule Lake, Manitoba, legally becoming "Sayisi Dene First Nation (Tadoule Lake, Manitoba)" in the 1990s.

The Chipewyan used to largely be nomadic. They used to be organized into small bands and temporarily lived in tepees. They wore one-piece pants and moccasin outfits. However, their nomadic lifestyle began to erode since 1717 when they encountered English entrepreneurs. The Chipewyan subsequently became important in the subarctic trade by exchanging furs and hides for metal tools, guns, and cloth.

Modern Chipewyan are either fluidly sedentary or semi-nomadic in lifestyle. Many still practice their traditional lifestyle for subsistence like fishing or hunting caribou although this process is modernized with the use of modern nets, tools, transportation and more. 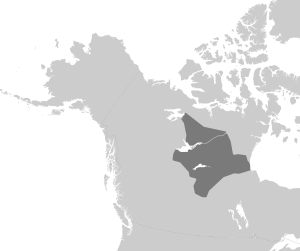 Historical distribution of the Denesuline language

Denesuline (Chipewyan) speak the Denesuline language, of the Athabaskan linguistic group. Denesuline is spoken by Aboriginal people in Canada whose name for themselves is a cognate of the word dene ("people"): Denésoliné (or Dënesųłiné). Speakers of the language speak different dialects but understand each other. There is a 'k', t dialect that most people speak. For example, people in Fond du lac, Gąnı kuę́ speak the 'k' and say yaki ku while others who use the 't' say yati tu. 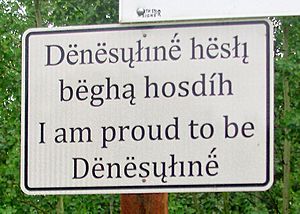 The name Chipewyan is, like many people of the Canadian prairies, of Algonquian origin. It is derived from the Plains Cree name for them, Cīpwayān (ᒌᐘᔮᐣ), "pointed skin", from cīpwāw (ᒌᐚᐤ), "to be pointed"; and wayān (ᐘᔮᐣ), "skin" or "hide" - a reference to the cut and style of Chipewyan parkas.

Most Chipewyan people now use Dene and Denesuline to describe themselves and their language. The Saskatchewan communities of Fond-du-Lac, Black Lake and Wollaston Lake are a few.

Despite the superficial similarity of the names, the Chipewyan are not related to the Chippewa (Ojibwa) people.

In 2015, Shene Catholique-Valpy, a Chipewyan woman in the Northwest Territories, challenged the territorial government over its refusal to permit her to use the ʔ character in her daughter's name, Sahaiʔa. The territory argued that territorial and federal identity documents were unable to accommodate the character. Sahaiʔa's mother finally registered her name with a hyphen in place of the ʔ, while continuing to challenge the policy. Shortly afterward, another woman named Andrea Heron also challenged the territory on the same grounds, for refusing to accept the ʔ character in her daughter's Slavey name, Sakaeʔah (actually a cognate of Sahaiʔa).

All content from Kiddle encyclopedia articles (including the article images and facts) can be freely used under Attribution-ShareAlike license, unless stated otherwise. Cite this article:
Chipewyan Facts for Kids. Kiddle Encyclopedia.