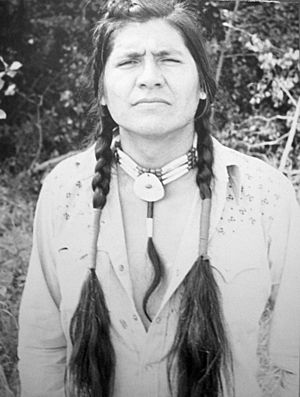 Gordon Tootoosis (born October 25, 1941 – July 5, 2011) was a Canadian actor, voice artist, and comedian. He was of Cree and Stoney descent. Tootoosis was a descendant of Yellow Mud Blanket, brother of the famous Cree leader Pitikwahanapiwiyin. In Open Season (2006), he voiced Sheriff Gordy. He played the same role in Boog and Elliot's Midnight Bun Run (2006). In July 2011, he died in the hospital from pneumonia, aged 69.

All content from Kiddle encyclopedia articles (including the article images and facts) can be freely used under Attribution-ShareAlike license, unless stated otherwise. Cite this article:
Gordon Tootoosis Facts for Kids. Kiddle Encyclopedia.