Chief Dan George, OC (July 24, 1899 – September 23, 1981) was a chief of the Tsleil-Waututh Nation, a Coast Salish band whose Indian reserve is located on Burrard Inlet in the southeast area of the District of North Vancouver, British Columbia, Canada. He was also an actor, musician, poet and author; his best-known written work was "My Heart Soars". As an actor, he is best remembered for portraying Old Lodge Skins opposite Dustin Hoffman in Little Big Man (1970), for which he was nominated for the Academy Award for Best Supporting Actor; also for his role in The Outlaw Josey Wales (1976), as Lone Watie, opposite Clint Eastwood.

Born as Geswanouth Slahoot in North Vancouver, his English name was originally Dan Slaholt. The surname was changed to George when he entered a residential school at age 5. He worked at a number of different jobs, including as a longshoreman, construction worker, and school bus driver, and was band chief of the Tsleil-Waututh Nation from 1951 to 1963 (then called the Burrard Indian Band).

In 1960, when he was already 60 years old, he landed his first acting job in a CBC Television series, Cariboo Country, as the character Ol' Antoine (pron. "Antwine"). He performed the same role in a Walt Disney Studios film Smith! (1969), adapted from an episode in the series The High Chaparral (the episode in turn being based on Breaking Smith's Quarter Horse, a novella by Paul St. Pierre). At age 71, he received several honors for his role in the film Little Big Man (1970), including a nomination for the Academy Award for Best Supporting Actor.

He played the role of Rita Joe's father in George Ryga's stage play, The Ecstasy of Rita Joe, in performances at Vancouver, the National Arts Centre in Ottawa, and Washington, D.C.

In 1972, he was a guest in David Winters' musical television special The Special London Bridge Special, starring Tom Jones, and Jennifer O'Neill. Others guests included The Carpenters, Kirk Douglas, Jonathan Winters, Hermione Gingold, Lorne Greene, Charlton Heston, George Kirby, Michael Landon, Terry-Thomas, Engelbert Humperdinck, Elliott Gould, Merle Park, and Rudolf Nureyev. That same year he acted in the film Cancel My Reservation and got the role of recurrent role Chief Moses Charlie in the comedy-drama television series The Beachcombers a role he would revisit until his death in 1981.

In 1973, he played the role of "Ancient Warrior" in an episode of the TV show Kung Fu. That same year George recorded "My Blue Heaven" with the band Fireweed, with "Indian Prayer" on the reverse.

The following year he had roles in Alien Thunder (1974), The Bears and I (1974), and Harry and Tonto (1974). On the musical side of things he released the album, Chief Dan George & Fireweed – In Circle, was released in 1974 comprising these songs and seven others.

In 1975, he portrayed the character Chief Stillwater in the "Showdown at Times Square" episode in Season 6 of McCloud. 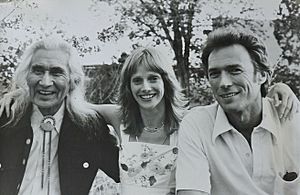 In 1976 he was hired to act in The Outlaw Josey Wales, and Shadow of the Hawk.

On television the following year he had role in the 1978 miniseries Centennial, based on the book by James A. Michener.

In 1979, he acted in Americathon, and Spirit of the Wind.

In 1980 he had his final film role in Nothing Personal.

George was well known for his poetic writing style and in 1974, George wrote "My Heart Soars" followed by "My Spirit Soars" in 1983, both published by Hancock House Publishers. These two books were later combined to form "The Best of Chief Dan George" which went on to become a best seller and continues to sell well today. One of his better known pieces of poetry "A Lament for Confederation" has become one of his most widely known works.

He died in Vancouver in 1981 at the age of 82. He was interred at Burrard Cemetery.

During his acting career, he worked to promote better understanding by non-aboriginals of the First Nations people. His soliloquy, Lament for Confederation, an indictment of the appropriation of native territory by European colonialism, was performed at the City of Vancouver's celebration of the Canadian centennial in 1967. This speech is credited with escalating native political activism in Canada and touching off widespread pro-native sentiment among non-natives. 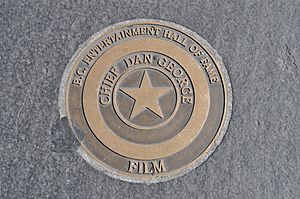 In 1971, George was made an Officer of the Order of Canada.

He was included on the Golden Rule Poster under "Native Spirituality" with the quote: "We are as much alive as we keep the earth alive".

Canadian actor Donald Sutherland narrated the following quote from his poem "My Heart Soars" in the opening ceremonies of the 2010 Winter Olympics in Vancouver.

The beauty of the trees,
the softness of the air,
the fragrance of the grass,
speaks to me.
And my heart soars.

All content from Kiddle encyclopedia articles (including the article images and facts) can be freely used under Attribution-ShareAlike license, unless stated otherwise. Cite this article:
Chief Dan George Facts for Kids. Kiddle Encyclopedia.