Donald McNichol Sutherland OC (born July 17, 1935) is a Canadian actor. He has appeared in more than 100 movie and television shows.

Sutherland is known for his roles in Fellini's Casanova, Klute, Don't Look Now, Invasion of the Body Snatchers, JFK, Ordinary People, Pride & Prejudice, and The Hunger Games. He is the father of actor Kiefer Sutherland.

Sutherland was born in Saint John, New Brunswick, Canada. His ancestry includes Scottish, as well as German and English. When Sutherland was a child, he had rheumatic fever, hepatitis and poliomyelitis. He studied at Victoria College and at University of Toronto. He studied acting London Academy of Music and Dramatic Art. Sutherland started off working as a radio DJ at the age of 14.

Recently, Sutherland portrayed President Snow in the movie adaptation of The Hunger Games, released in March 2012. He repeated the role in its sequel, The Hunger Games: Catching Fire (2013).

Sutherland became a blogger for the American news website The Huffington Post during the 2008 United States presidential election campaign. In his blogs, he openly stated his support for Barack Obama.

During the Opening Ceremony of the 2010 Winter Olympics in Vancouver he narrated the events. He was also one of the Olympic flag bearers. 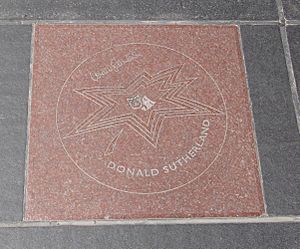 All content from Kiddle encyclopedia articles (including the article images and facts) can be freely used under Attribution-ShareAlike license, unless stated otherwise. Cite this article:
Donald Sutherland Facts for Kids. Kiddle Encyclopedia.