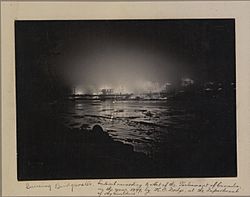 Picture of the 1899 Bridgewater fire

The first house in Bridgewater was built in 1812 by Ralph Hotchkiss. The town was incorporated in 1899. This was shortly after a fire in Bridgewater which burned the entire downtown area. For much of the 20th century, the town's economy depended on forestry. There was a large wood mill in the center of town. The Nova Scotia Central Railway and later the Halifax and Southwestern Railway had a central hub at Bridgewater. The "Acadia Marine Engine Company" was based in Bridgewater. It made engines for fishing boats.

All content from Kiddle encyclopedia articles (including the article images and facts) can be freely used under Attribution-ShareAlike license, unless stated otherwise. Cite this article:
Bridgewater, Nova Scotia Facts for Kids. Kiddle Encyclopedia.