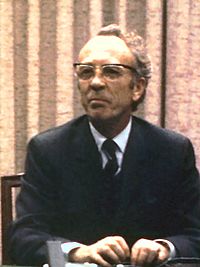 Douglas founded a political party called the CCF representing socialism and the working class. Douglas was elected Premier of Saskatchewan and created universal healthcare for it. Douglas’s health plan was copied by other provinces and spread to all of Canada. Douglas also created a Socialist political party called the New Democratic Party or NDP.

Douglas is generally very respected because he created Canada’s universal healthcare system but recently some people have suggested that he should not be that praised because in the 1930’s he was a supporter of eugenics.

Douglas died of cancer on 24 February 1986, at the age of 81 in Ottawa. His daughter, Shirley Douglas, was an actress.

All content from Kiddle encyclopedia articles (including the article images and facts) can be freely used under Attribution-ShareAlike license, unless stated otherwise. Cite this article:
Tommy Douglas Facts for Kids. Kiddle Encyclopedia.