Weyburn is the eleventh-largest city in Saskatchewan, Canada. The city has a population of 10,870. It is on the Souris River 110 km (68 mi) southeast of the provincial capital of Regina and is 70 km (43 mi) north from the North Dakota border in the United States. The name is reputedly a corruption of the Scottish "wee burn," referring to a small creek. The city is surrounded by the Rural Municipality of Weyburn No. 67.

The Canadian Pacific Railway (CPR) reached the future site of Weyburn from Brandon, Manitoba in 1892 and the Soo Line from North Portal on the US border in 1893. A post office opened in 1895 and a land office in 1899 in anticipation of the land rush which soon ensued. In 1899, Knox Presbyterian Church was founded with its building constructed in 1906 in the high-pitched gable roof and arches, standing as a testimony to the faith and optimism in the Weyburn area. Weyburn was legally constituted a village in 1900, a town in 1903 and finally as a city in 1913. From 1910 until 1931 the Weyburn Security Bank was headquartered in the city.

Weyburn was previously home to the Souris Valley Mental Health Hospital, which was closed as a health care facility and sold in 2006, and demolished in 2009. When the mental hospital opened in 1921, it was the largest building in the British Commonwealth and was considered to be on the cutting edge of experimental treatments for people with mental disabilities. The facility had a reputation of leading the way in therapeutic programming. At its peak, the facility was home to approximately 2,500 patients. The history of the facility is explored in the documentary Weyburn: An Archaeology of Madness.

In 2016, Weyburn was named best place to live in Saskatchewan by MoneySense magazine, which had measured quality of life in 219 cities in Canada. The city was ranked second best city to live among all prairie cities in Alberta, Saskatchewan and Manitoba, being ranked above all small, medium and large sizes of cities in the Prairies such as Calgary, Edmonton, Regina, Saskatoon, and Winnipeg.

Weyburn is situated near the upper delta of the 470-mile (760 km) long Souris River. The Souris River continues southeast through North Dakota eventually meeting the Assiniboine River in Manitoba. In the 1800s this area was known as an extension of the Greater Yellow Grass Marsh. Extensive flood control programs have created reservoirs, parks and waterfowl centres along the Souris River. Between 1988 and 1995, the Rafferty-Alameda Project was constructed to alleviate spring flooding problems created by the Souris River.

Weyburn is the home of the Weyburn Red Wings of the Saskatchewan Junior Hockey League (SJHL) and the Beavers of the Western Major Baseball League, a collegiate summer baseball league in Canada's prairie provinces. In addition, Weyburn is home to Saskatchewan's largest amateur wrestling club. [weyburn cobra wrestling club]

Weyburn is the largest inland grain gathering point in Canada. Well over half a million tons of grain pass through the Weyburn terminals each year. Oil and gas exploration make up the other major component of the economy.

It also operated Weyburn Junior High School from 1966 to 2016, which was closed in favour of relocating students to Weyburn Comprehensive High School.

Haig School, Queen Elizabeth School, and Souris School are being closed in favour of relocating students to Legacy Park Elementary School in September 2021.

Southeast College offers technical, trade and non-degree programs, as well as distance learning from the University of Regina and University of Saskatchewan.

The Weyburn Public Library is a branch of the Southeast Regional Library system. 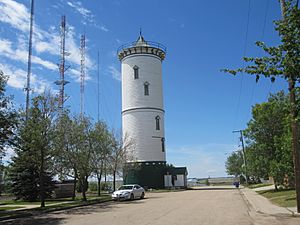 The 90-foot water tower is one of only four of this type in Saskatchewan. It was in service from 1910 to 1977. It stands on Signal Hill in Weyburn, which is still an important site for telecommunications towers and once had the tallest tower in Western Canada.

Weyburn is at the junction of highways 13, 35 and 39. The Weyburn Airport is northeast of the city.

The Weyburn General Hospital is operated by the SunCountry Health Region.

All content from Kiddle encyclopedia articles (including the article images and facts) can be freely used under Attribution-ShareAlike license, unless stated otherwise. Cite this article:
Weyburn Facts for Kids. Kiddle Encyclopedia.