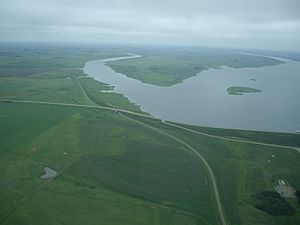 The Souris River ( French: rivière Souris) or Mouse River (as it is alternatively known in the U.S., a direct translation from its French name) is a river in central North America. It is about 700 km (435 mi) in length and drains about 23,600 square miles (61,100 km2). It rises in the Yellow Grass Marshes north of Weyburn, Saskatchewan. It wanders south through North Dakota beyond Minot to its most southern point at the city of Velva, and then back north into Manitoba. The river passes through the communities of Melita, Hartney, Souris and Wawanesa and on to its confluence with the Assiniboine River near Treesbank, about 25 miles (40 km) south east of Brandon. The main tributaries which flow into the Souris in Manitoba are the Antler River, the Gainsborough and Plum Creeks. Much of its drainage basin is fertile silt and clay deposited by former glacial Lake Souris.

Two large dams in Saskatchewan, Rafferty Dam and Alameda Dam were built, in part, to reduce flood peaks on the Souris River.

In summer 2011, a historic flood affected much of the Souris River basin, overtopping levees and causing the evacuation of about 11,000 residents in Minot as well as significant damage to farmland and other property along the length of the river.

Cities along the river

Rural Municipalities along the river

All content from Kiddle encyclopedia articles (including the article images and facts) can be freely used under Attribution-ShareAlike license, unless stated otherwise. Cite this article:
Souris River Facts for Kids. Kiddle Encyclopedia.