Kids Encyclopedia Facts
This page is about the city in Saskatchewan, Canada. For other uses, see Estevan (disambiguation).

Estevan is the eighth-largest city in Saskatchewan, Canada. It is approximately 16 km (9.9 mi) north of the Canada–United States border. The Souris River runs by the city. This city is surrounded by the Rural Municipality of Estevan No. 5.

The first settlers in what was to become Estevan arrived in 1892, along with the expansion of the Canadian Pacific Railway. It was incorporated as a village in 1899, and later became a town in 1906. On March 1, 1957, Estevan acquired the status of a city, which, in Saskatchewan terms, is any community of 5,000 or more.

The name origin is attributed to George Stephen's Registered Telegraphic Address, Estevan. George Stephen was the first President of the Canadian Pacific Railway from 1881 to 1888.

On December 22, 1915, the 152nd (Weyburn-Estevan) Battalion, CEF was authorised and recruited men from the area before departing to Great Britain on October 3, 1916.

Estevan was the site of the notorious Estevan Riot in 1931. Although most of the strikers were from nearby Bienfait, the strike is associated with Estevan because it was in this city the demonstrators were met by members of the Royal Canadian Mounted Police. After the subsequent riot, which lasted 45 minutes, three strikers lay dead. It was later proven the three miners had been killed by the RCMP. The miners had been organized by the Workers' Unity League.

To help celebrate the centenary of settlement in the Estevan area, the Estevan History Book Committee published a handsome, two-volume history of the city entitled A Tale that is Told in 1981. The two volumes present a detailed history of the city and the surrounding area, including information about early pioneers, homesteaders, railroads, churches, schools, and businesses. 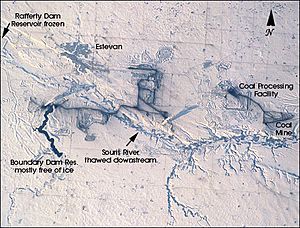 Estevan, and the Estevan Coalfield, along the Souris River, viewed from the Space Shuttle, February 2001

The city of Estevan has two museums, one of which is primarily a gallery.

The Souris Valley Museum, SVM, is a local and regional history museum focused on human development and daily life within Southeast Saskatchewan. It was founded in 2001, primarily from the collection of Stan Durr. The museum provides an engaging depiction of the social and cultural influences and economic development of Southeast Saskatchewan. The collection includes the Schneller Schoolhouse, a Threshing Cook Car, a Homesteader Shack, two of Estevan's original Firetrucks and a Heritage Mining Display.

The Estevan Arts Council, founded in 1967, is a non-profit organisation that offers art classes and workshops, adjudicates art shows, hosts concerts and provides a youth art scholarships through the work of volunteers and community donations and grants. 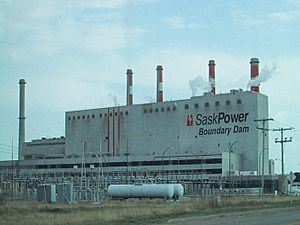 Estevan has a humid continental climate (Köppen climate classification Dfb) It falls into the NRC Plant Hardiness Zone 4a.

All content from Kiddle encyclopedia articles (including the article images and facts) can be freely used under Attribution-ShareAlike license, unless stated otherwise. Cite this article:
Estevan Facts for Kids. Kiddle Encyclopedia.