Burlington is a city in Ward County, North Dakota, United States. It was founded in 1883, the third in a series that included two earlier settlements. Despite this, Burlington is still the oldest city in Ward County, as well as north-western and north central North Dakota. In 1885, as it was the only city in the then-newly formed Imperial Ward County (now split into Ward, Renville, Mountrail, and Burke counties), it was made the county seat, a position it held until 1888. The population was 1,060 at the 2010 census. Burlington is part of the Minot Micropolitan Statistical Area. 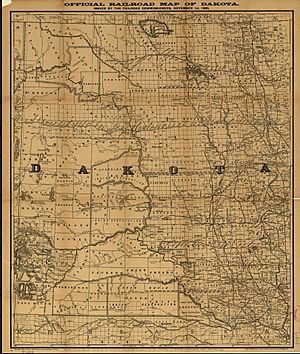 Burlington and its former settlements were founded by James Johnson and James Colton (the men who also settled Larimore, North Dakota) in Dakota Territory in the late 1870s. Earlier settlements were The Forks, and later Colton (named after James Colton), which are considered forerunners of the city. Its current name was given to it by James Johnson during the creation of the post office, and was the name of his hometown of Burlington, Iowa. "The Forks" is used as a nickname for Burlington, both alluding to its heritage, as well as its geographic location at the confluence of the Des Lacs and Souris Rivers. One of the first buildings in Burlington was the first Ward County Courthouse, built by James Johnson, and used originally as a granary. It was moved to the North Dakota State Fair fairgrounds in the mid-20th century and now serves as one of the two buildings of the Ward County Historical Society's Fairgrounds Museum. In the early 1890s, the Burlington Reporter became the first newspaper in western North Dakota. It would in the future be renamed to the Minot Daily News. On June 24, 2011, the entire city was evacuated when floodwaters swept through the town.

There were 399 households of which 40.4% had children under the age of 18 living with them, 57.9% were married couples living together, 10.3% had a female householder with no husband present, 5.3% had a male householder with no wife present, and 26.6% were non-families. 21.6% of all households were made up of individuals and 8.3% had someone living alone who was 65 years of age or older. The average household size was 2.66 and the average family size was 3.11.

There were 369 households out of which 51.8% had children under the age of 18 living with them, 65.6% were married couples living together, 11.7% had a female householder with no husband present, and 19.2% were non-families. 14.6% of all households were made up of individuals and 4.3% had someone living alone who was 65 years of age or older. The average household size was 2.97 and the average family size was 3.27.

The railroads remain in Burlington today, and are becoming more important to the local oil and gravel industries, though Great Northern is now part of the BNSF Railway and the Soo Line is run by the Canadian Pacific Railway.

There are three private airstrips and landing strips within a three-mile radius of Burlington. One, Pietschtree airstrip, is located directly next to Burlington to the north. Otherwise, major aerial transportation is through Minot International Airport.

This climatic region is typified by large seasonal temperature differences, with warm to hot (and often humid) summers and cold (sometimes severely cold) winters. According to the Köppen Climate Classification system, Burlington has a humid continental climate, abbreviated "Dfb" on climate maps.

All content from Kiddle encyclopedia articles (including the article images and facts) can be freely used under Attribution-ShareAlike license, unless stated otherwise. Cite this article:
Burlington, North Dakota Facts for Kids. Kiddle Encyclopedia.