Kiefer William Frederick Dempsey George Rufus Sutherland (born 21 December 1966) is a Canadian actor, producer, director, and singer-songwriter. He is known for his role as Jack Bauer in the Fox drama series 24, for which he won an Emmy Award, a Golden Globe Award, two Screen Actors Guild Awards, and two Satellite Awards.

He is the son of Canadian actors Donald Sutherland and Shirley Douglas and the father of actress Sarah Sutherland.

Sutherland has been inducted to the Hollywood Walk of Fame and to Canada's Walk of Fame, and has received a Lifetime Achievement Award at the Zurich Film Festival. 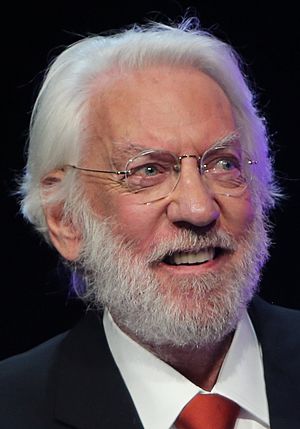 Sutherland was born in St Mary's Hospital, Paddington, London, to Donald Sutherland and Shirley Douglas, both successful Canadian actors who had been living and working in the United Kingdom for some time.

Sutherland is named after American-born writer and director Warren Kiefer, who directed Donald Sutherland in his first feature film. He has a twin sister, Rachel.

His maternal grandfather was Scottish-born Canadian politician and former Premier of Saskatchewan Tommy Douglas, who is widely credited for bringing universal health care to Canada. 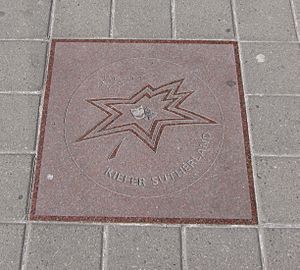 Sutherland made his screen debut in Max Dugan Returns, in which his father Donald Sutherland also starred. After receiving critical acclaim for his role as Donald Campbell in The Bay Boy, Sutherland moved to Hollywood. Stand by Me was the first film Sutherland made in the United States. His role as vampire David in The Lost Boys is one of his iconic roles in his career reviews by many critics and audiences.

In the Western film Young Guns (1988), he starred alongside Emilio Estevez and Lou Diamond Phillips. He went on to star again with his close friend Lou Diamond Phillips, in the crime-action film Renegades. That same year, he and his father appeared at the 61st Academy Awards as presenters of the Academy Honorary Award to the National Film Board of Canada. 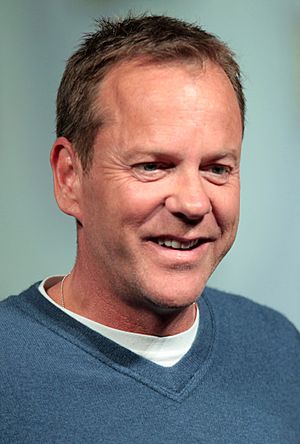 Sutherland has one daughter (Sarah) from his first marriage to Camelia Kath. Julia Roberts met Sutherland in 1990, when they co-starred in Flatliners. In August 1990, Roberts and Sutherland announced their engagement, with an elaborate studio-planned wedding scheduled for 14 June 1991. Roberts broke the engagement three days before the wedding.

Sutherland began dating model/actress Cindy Vela of Olmito, Texas sometime in 2014, keeping their relationship private up until 2017 when they began to be seen together in public. Vela and Sutherland became engaged in 2017.

Sutherland has featured in many movies and television during his long career, below is a list of the films he has been in:

All content from Kiddle encyclopedia articles (including the article images and facts) can be freely used under Attribution-ShareAlike license, unless stated otherwise. Cite this article:
Kiefer Sutherland Facts for Kids. Kiddle Encyclopedia.