He is equally creative on television, having starred in the Fox drama series The Following (2013–2015). For the HBO original film Taking Chance (2009), Bacon won a Golden Globe Award and a Screen Actors Guild Award, also receiving a Primetime Emmy Award nomination. The Guardian named him one of the best actors never to have received an Academy Award nomination.

In 2003, Bacon received a star on the Hollywood Walk of Fame for his contributions to the motion pictures industry.

Bacon is known for the Bacon Number, he has become associated with the concept of inter-connectedness (as in social networks), having been popularized by the game "Six Degrees of Kevin Bacon". In 2007, he created SixDegrees.org, a charitable foundation. 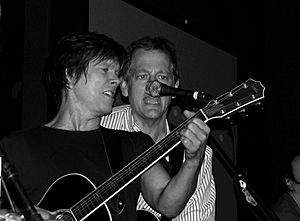 Bacon, the youngest of six children, was born and raised in a close-knit family in Philadelphia. His mother, Ruth Hilda (née Holmes; 1916–1991), taught at an elementary school and was a liberal activist, while his father, Edmund Norwood Bacon (May 2, 1910 – October 14, 2005), was a well-respected architect and a prominent Philadelphian who was Executive Director of the Philadelphia City Planning Commission for many years.

At age 16, in 1975, Bacon won a full scholarship to and attended the Pennsylvania Governor's School for the Arts at Bucknell University, a state-funded five-week arts program at which he studied theater under Dr. Glory Van Scott. The experience solidified Bacon's passion for the arts. 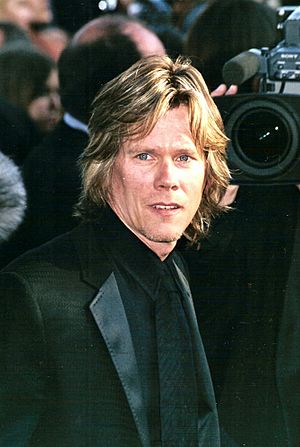 Bacon left home at age 17 to pursue a theater career in New York City, where he appeared in a production at the Circle in the Square Theater School. Bacon's debut in the fraternity comedy National Lampoon's Animal House (1978) did not lead to the fame he had sought, and Bacon returned to waiting tables and auditioning for small roles in theater. He briefly worked on the television soap operas Search for Tomorrow (1979) and Guiding Light (1980–81) in New York. 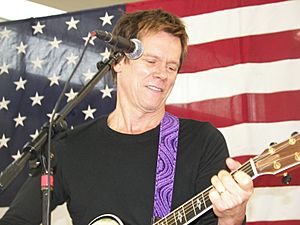 Beginning in 2012, Bacon has appeared in a major advertising campaign for the EE mobile network in the United Kingdom, based on the Six Degrees concept and his various film roles. In 2015, he became a commercial spokesperson for the U.S. egg industry.

Kevin formed a band called The Bacon Brothers with his brother, Michael. The duo has released six albums. 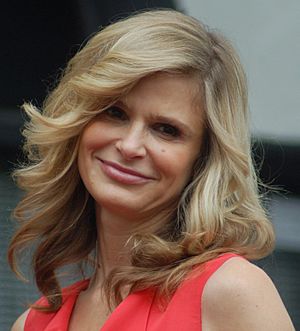 Bacon was in a five-year relationship with actress Tracy Pollan, in the 1980s. He is now married to actress Kyra Sedgwick since September 4, 1988; they met on the set of the PBS version of Lanford Wilson's play Lemon Sky. They have two children, Travis Sedgwick (b. 1989) and Sosie Ruth (b. 1992). The family resides on the Upper West Side of Manhattan.

Bacon and Sedgwick appeared in will.i.am's video "It's a New Day", which was released following Barack Obama's 2008 presidential win, they have also starred together in a few films. The pair lost part of their savings in the Ponzi scheme of infamous swindler Bernard Madoff. 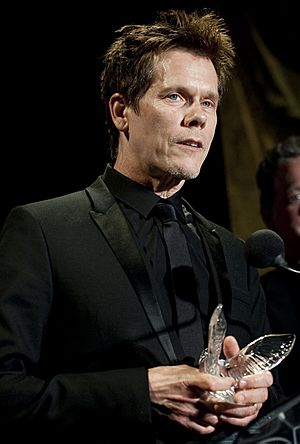 Bacon is the subject of the trivia game titled Six Degrees of Kevin Bacon, based on the idea that, due to his prolific screen career covering a diverse range of genres, any Hollywood actor can be linked to another in a handful of steps based on their association with Bacon. The name of the game derives from the idea of six degrees of separation.

Although he was initially dismayed by the game, the meme stuck, and Bacon eventually embraced it, forming the charitable initiative SixDegrees.org, a social networking site intended to link people and charities to each other.

The measure of proximity to Bacon has been mathematically formalized as the Bacon number and can be referenced at websites including Oracle of Bacon, which is in turn based upon Internet Movie Database data. In 2012 Google added a feature to their search engine, whereby searching for an actor's name followed by the words "Bacon Number" will show the ways in which that actor is connected to Kevin Bacon. This feature is no longer active. 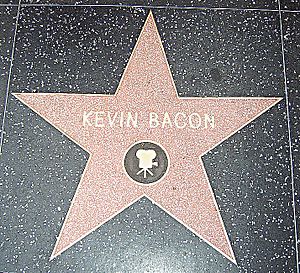 Kevin Bacon's star on the Hollywood Walk of Fame

All content from Kiddle encyclopedia articles (including the article images and facts) can be freely used under Attribution-ShareAlike license, unless stated otherwise. Cite this article:
Kevin Bacon Facts for Kids. Kiddle Encyclopedia.