Robert John Downey Jr. (born April 4, 1965) is an American actor and producer. In 2008, Downey was named by Time magazine among the 100 most influential people in the world, and from 2013 to 2015, he was listed by Forbes as Hollywood's highest-paid actor. His films have grossed over $14.4 billion worldwide, making Downey the sixth-highest-grossing box office star of all-time.

At the age of five, he made his acting debut in Robert Downey Sr.'s film Pound in 1970. He subsequently worked with the Brat Pack in the teen films Weird Science (1985) and Less Than Zero (1987). In 1992, Downey portrayed the title character in the biopic Chaplin, for which he was nominated for the Academy Award for Best Actor and won a BAFTA Award. He joined the TV series Ally McBeal, for which he won a Golden Globe Award.

Downey gained global recognition for starring as Tony Stark / Iron Man in ten films within the Marvel Cinematic Universe, beginning with Iron Man (2008). He has also played the title character in Guy Ritchie's Sherlock Holmes (2009), which earned him his second Golden Globe, and its sequel (2011).

Downey was born in Manhattan, New York City, the younger of two children. His father, Robert Downey Sr., is an actor, writer, producer, cinematographer, and director of underground films, and his mother, Elsie (nee Ford), is also an actress and appeared in Downey, Sr.'s movies. His paternal grandfather was of Lithuanian Jewish ancestry and his paternal grandmother was of Irish Canadian and Hungarian Jewish ancestry. His mother is of Scottish, English, German, and Swiss German ancestry. His father was born "Robert Elias", and changed his last name to "Downey" (after his stepfather James Downey), when he was a minor and wanted to enlist in the Army. He and his older sister, Allyson, grew up in Greenwich Village.

Downey started dating actress Sarah Jessica Parker after meeting her on the set of a film. The couple later separated. 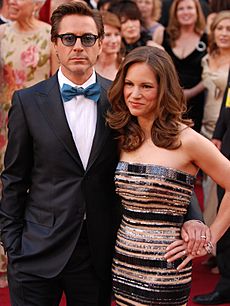 Downey and his wife Susan at the 2010 Academy Awards

In 2003, Downey met producer Susan Levin, an Executive Vice President of Production at Joel Silver's film company, Silver Pictures on the set of Gothika. In August 2005, the couple were married, in a Jewish ceremony, at Amagansett, New York.

Their first child, a son named Exton Elias, was born in February 2012, and their second, a daughter named Avri Roel, was born in November 2014.

Downey has been a close friend of Mel Gibson since they starred in Air America.

All content from Kiddle encyclopedia articles (including the article images and facts) can be freely used under Attribution-ShareAlike license, unless stated otherwise. Cite this article:
Robert Downey Jr. Facts for Kids. Kiddle Encyclopedia.