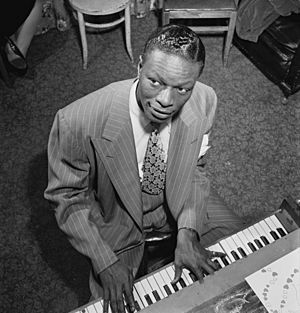 "Smile" is a song with music composed by Charlie Chaplin. This music was the theme for the soundtrack of one of Chaplin's movies, Modern Times (1936). The music had no lyrics. It was originally written in D minor. John Turner and Geoffrey Parsons added lyrics and a title in 1954. The lyrics are based on lines and themes from the movie. The singer is telling the listener to smile and be optimistic. "Smile" has become a popular song since its original use in Chaplin's movie.

The song, with its lyrics, was originally sung by Nat King Cole in 1954. Michael Jackson recorded his own version of the song in March 1993 for his album HIStory: Past, Present and Future in 1995.

All content from Kiddle encyclopedia articles (including the article images and facts) can be freely used under Attribution-ShareAlike license, unless stated otherwise. Cite this article:
Smile (Charlie Chaplin song) Facts for Kids. Kiddle Encyclopedia.