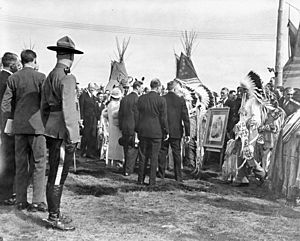 King George VI and Queen Elizabeth greet chieftains of the Stoney Indian Tribe, who have brought a photo of Queen Victoria, during the royal visit to Canada in 1939. The treaties were originally signed by representatives of the British Crown acting in Queen Victoria's name. 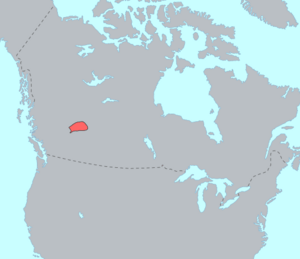 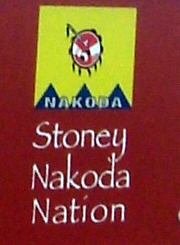 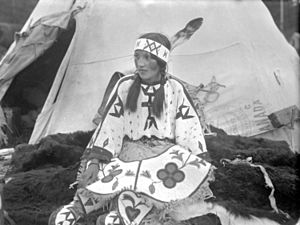 The Nakoda (also known as Stoney or Îyârhe Nakoda) are an Indigenous people in Western Canada and, originally, the United States.

They used to inhabit large parts of what is now Alberta, Saskatchewan and Montana, but their reserves are now located in Alberta and in Saskatchewan, where they are scarcely differentiated from the Assiniboine. Through their language they are related to the Dakota and Lakota nations of the Great Plains and the Rocky Mountains, part of the large Sioux Nation.

They refer to themselves in their own language as "Nakoda", meaning friend, ally. The name "Stoney" was given them by white explorers, because of their technique of using fire-heated rocks to boil broth in rawhide bowls. They are very closely related to the Assiniboine, who are also known as Stone Sioux (from the Ojibwe asinii-bwaan).

The Stoney were "excluded" from Banff National Park between 1890 and 1920. In 2010 they were officially "welcomed back".

The Stoney are descendants of individual bands of Dakota, Lakota and Nakota, in particular of western groups of Assiniboine, from which they spun out as an independent group at about 1744. The Stoney were divided geographically and culturally into two tribal groups or divisions with different dialects, which in turn were further divided into several bands:

Members of the Nakoda nations of Paul and Alexis signed an adhesion to Treaty 6 in 1877.

In 1877, representatives of the Nakoda Nations of Bearspaw, Chiniki and Wesley met with representatives of the British Crown to discuss the terms of Treaty 7. In exchange for use of traditional native lands, the Crown agreed to honor their right to self-government and an ancestral way of life. They were also promised reserve lands, 279 km² situated along the Bow River between the Kananaskis River and the Ghost River, which became the Big Horn, Stoney and Eden Valley reserves, shared between the Bearspaw, Chiniki and Wesley tribes.

All content from Kiddle encyclopedia articles (including the article images and facts) can be freely used under Attribution-ShareAlike license, unless stated otherwise. Cite this article:
Nakoda (Stoney) Facts for Kids. Kiddle Encyclopedia.