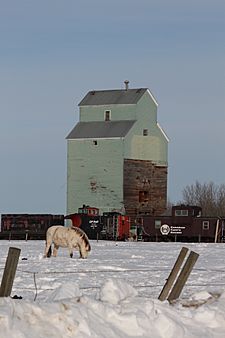 Maskwacis known as Hobbema prior to 2014, is an unincorporated community in central Alberta, Canada, a portion of which is designated a hamlet within Ponoka County. A portion of the community is also recognized as a designated place by Statistics Canada under its previous name of Hobbema. Maskwacis is located near the intersection of Highway 2A and Highway 611, approximately 70 kilometres (43 mi) south of the City of Edmonton.

The area was originally known as Maskwacis and Father Constantine Scollen always referred to it as "Bear Hills" when he attempted to re-establish a Catholic mission there, in late 1884 and 1885, around the time that he and Chief Bobtail succeeded in persuading the young men not to join the "Riel Rebellion" of that year. It was named Hobbema after Meindert Hobbema during the construction of the Calgary and Edmonton Railway in 1891. The community, including the hamlet portion within Ponoka County, was renamed Maskwacis (meaning "bear hills" in Cree) on January 1, 2014.

The community has an employment centre, health board and college.

The community is home to Maskwachees Cultural College.

It was once home to Ermineskin Indian Residential School.

It is home to an annual pow wow.

CHOB-TV is a television station in Maskwacis.

Briar Stewart made an award-winning documentary, "Journey to Jamaica", about a group of cadets from Maskwacis.

W. P. Kinsella wrote a number of short stories which were set in what was then called Hobbema, including the collections Dance Me Outside, The Fencepost Chronicles, Brother Frank's Gospel Hour, and The Secret of the Northern Lights. The stories "met with controversy from some critics who objected to Kinsella's appropriation of Native voice and what they saw as stereotype-based humour."

All content from Kiddle encyclopedia articles (including the article images and facts) can be freely used under Attribution-ShareAlike license, unless stated otherwise. Cite this article:
Maskwacis Facts for Kids. Kiddle Encyclopedia.