Senate of Canada facts for kids 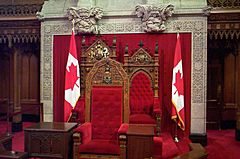 The throne and chair in the background are used by the Queen and her consort, or the Governor General and his or her spouse, respectively, during the opening of Parliament. The Speaker of the Senate employs the chair in front.

The Senate of Canada is the upper house of the Parliament of Canada. There are 105 members of the Canadian senate. They are appointed by the Governor General of Canada with the advise of the Prime Minister of Canada.

The number of senators from the different parts of Canada varies. Four regions have 24 senators each.

All content from Kiddle encyclopedia articles (including the article images and facts) can be freely used under Attribution-ShareAlike license, unless stated otherwise. Cite this article:
Senate of Canada Facts for Kids. Kiddle Encyclopedia.