The Canadian Prairies (usually referred to as simply the Prairies in Canada) is a region in Western Canada. It includes the Canadian portion of the Great Plains and the Prairie Provinces, namely Alberta, Saskatchewan, and Manitoba. These provinces are partially covered by grasslands, plains, and lowlands, mostly in the southern regions. The northernmost reaches of the Canadian Prairies are less well known. They are marked by forests and more variable topology. If the region is defined to include areas only covered by prairie land, the corresponding region is known as the Interior Plains. Geographically, the Canadian prairies extend to northeastern British Columbia, but this province is not included in a political manner.

The prairies in Canada are a temperate grassland and shrubland biome within the prairie ecoregion of Canada that consists of northern mixed grasslands in Alberta, Saskatchewan, southern Manitoba, as well as northern short grasslands in southeastern Alberta and southwestern Saskatchewan. The prairie ecozone of Canada includes the northern tall grasslands in southern Manitoba and Aspen parkland, which covers central Alberta, central Saskatchewan, and southern Manitoba. The Prairie starts from north of Edmonton and it covers the three provinces in a southward-slanting line east to the Manitoba-Minnesota border. The prairie is the most dominant land cover in Alberta and the least in Manitoba, since boreal forest covers a large area of Manitoba. Alberta has the most land classified as prairie, while Manitoba has the least, as the boreal forest begins more southerly in Manitoba than in Alberta.

The core climate of the Canadian prairie region is defined as a semi-arid climate and is often based upon the Köppen climate classification system. This type of classification encompasses five main climate types, with several categoric subtypes based on the precipitation pattern of the region. The majority of the prairie provinces experience snowy, fully humid continental climates with cool summers, also known as class Dfc on the Köppen climate scale. The southern-most regions of the prairies tend to experience fully humid continental climates with warm summers, Dfb. A trifling section surrounding the Alberta-Saskatchewan border has been classified as Bsk, semi-cold and arid climate.

Precipitation events in the Canadian prairies are very important to study as these locations make up 80% of the country's agricultural production. On average, 454 mm of precipitation falls on the prairies each year. Out of the three prairie provinces, Saskatchewan obtains the least amount of precipitation annually (395 mm), with Manitoba receiving the most at 486 mm. Most rainfall typically happens in the summer months such as June and July. With the high humidity of the prairies, tornadoes are likely to occur—marking central Saskatchewan and southern Manitoba as high probability areas. Approximately 72% of tornadoes in Canada are seen across the prairies due to the capability of summer thunderstorm precipitation to mechanically mix with the air adjacent to the relatively flat surface of the region.

Although the Prairie Provinces region is named for the prairies located within Alberta, Saskatchewan and Manitoba, the physical geography of the three provinces is quite diverse, consisting of portions of the Canadian Shield, the Western Cordillera and the Canadian Interior Plains. The plains comprise both prairies and forests while, with the exception of freshwater along the Hudson Bay, the shield is predominantly forested.

Three main grassland types occur in the Canadian prairies: tallgrass prairie, mixed grass prairie, and fescue prairie (or using the WWF terminology, northern tall grasslands, northern mixed grasslands, and northern short grasslands). Each has a unique geographic distribution and characteristic mix of plant species. All but a fraction of one percent of the tallgrass prairie has been converted to cropland. What remains occurs on the 6,000 km2 (2,300 sq mi) plain centred in the Red River Valley in Manitoba. Mixed prairie is more common and is part of the dry interior plains that extend from Canada south to the U.S. state of Texas. 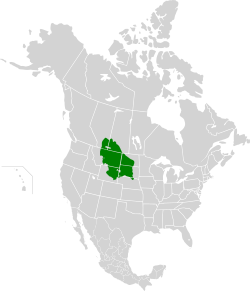 The northern short grasslands (WWF terminology) shown here on a map of North America in green, is a type of true prairie (grassland) which occurs in the southern parts of the Prairie Provinces.
Main page: Prairies (ecozone)

More than half of the remaining native grassland in the Canadian prairies is mixed. Though widespread in southern Saskatchewan and southeastern Alberta, because of extensive cattle grazing, it is estimated that only 24% of the original mixed prairie grassland remains. Fescue prairie occurs in the moister regions, occupying the northern extent of the prairies in central and southwestern Alberta and west-central Saskatchewan. 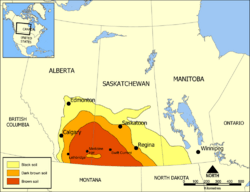 The southwestern Canadian prairies, supporting brown and black soil types, are semi-arid and highly prone to frequent and severe droughts. The zones around the cities of Regina and immediately east of Calgary are also very dry. Most heavy precipitation quickly dissipates by the time it passes Cheadle on its way heading east. In an average year, southern Saskatchewan receives between 30–51 cm (12–20 in) of precipitation, with the majority falling between April and June. Frost from October to April (and sometimes even early May) limits the growing season for certain crops.

The eastern section of the Canadian prairies in Manitoba is well watered with several large lakes such as Lake Winnipeg and several large rivers. The area also gets reasonable amounts of precipitation. The middle sections of Alberta and Saskatchewan are also wetter than the south and have better farmland, despite having a shorter frost-free season. The areas around Edmonton and Saskatoon are especially notable as good farmland. Both lie in the northern area of the Palliser's Triangle, and are within aspen parkland a transitional prairie ecozone.

Further north, the area becomes too cold for most agriculture besides wild rice operations and sheep raising, and it is dominated by boreal forest. The Peace Region in northwestern Alberta is an exception, however. It lies north of the 55th Parallel and is warm and dry enough to support extensive farming. Aspen parkland covers the area; The long daylight hours in this region during the summer are an asset despite having an even shorter growing season than central Alberta. In fact, agriculture plays a major economic role in the Peace Region. 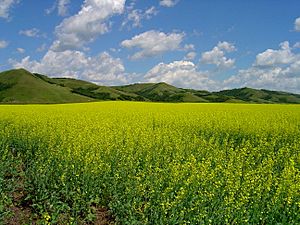 A canola field in the Qu'Appelle Valley in Southern Saskatchewan.

In the mid 20th century, the economy of the prairies exploded, due to the oil boom, and introduced a growth of jobs. The primary industries are agriculture and services. Agriculture consisting of livestock (cattle and sheep), cultivating crops (oats, canola, wheat, barley), and production of oil. Due to the production of oil, the service industry expanded in order to provide for the employees of the oil companies extracting the oil. In the 1950s-1970s, the explosion of oil production increased the worth of Alberta and allowing it to become the “nations richest province” and Canada one of the top petroleum exporters in the world. Edmonton and Calgary drew in a larger population with the increase in jobs in the energy field, which causes the jobs supporting this field to grow as well. It was through the steady economic growth that followed this explosion that the prairies region began to switch from an agriculture-based job sector to one with services included. In 2014, the global market for oil fell and led to a recession, impacting the economy dramatically. Alberta still has an oil dominant economy even as the traditional oil wells dry up, there are oil sands further north (i.e. Fort McMurray) that continue to provide jobs to extract, drill and refine the oil. Saskatchewan, in particular, in the early 20th century grew economically due to the Canadian agricultural boom and produce large crops of wheat. It is said to have a “one-crop economy” due to such dependency on this crop alone, but after 1945 the economy took another turn with technological advancements that allowed for the discovery of uranium, oil, and potash.

The Prairies are distinguished from the rest of Canada by cultural and political traits. The oldest influence on Prairie culture are the First Nations, who have lived in the area for millennia. The first Europeans to see the Prairies were fur traders and explorers from eastern Canada (mainly present-day Quebec) and Great Britain via Hudson Bay. They gave rise to the Métis, working class "children of the fur trade." During their settlement by Europeans, the prairies were settled in distinct ethnic block settlements giving certain areas distinctively Ukrainian, German, French, or Scandinavian Canadian cultures.

Some areas also developed cultures around their main economic activity. For example, southern Alberta is renowned for its cowboy culture, which developed when real open range ranching was practised in the 1880s. Canada's first rodeo, the Raymond Stampede, was established in 1902. These influences are also evident in the music of Canada's Prairie Provinces. This can be attributed partially to the massive influx of American settlers who began to migrate to Alberta (and to a lesser extent, Saskatchewan) in the late 1880s because of the lack of available land in the United States. 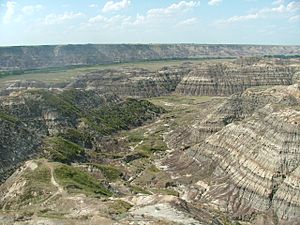 The Prairie Provinces have given rise to the "prairie protest" movements, such as the Winnipeg General Strike of 1919, the first general strike in Canadian history. These political movements (both of the left and right) tend to feed off of well established feelings of Western alienation, and each one represents a distinct challenge to the perceived Central Canadian elite.

The Prairies continue to have a wide range of political representation. While the Conservative Party of Canada has widespread support throughout the region, the New Democratic Party holds seats at the provincial level in all three provinces, as well as holding seats at the federal level in Alberta and Manitoba. The Liberal Party of Canada presently hold four federal seats in Winnipeg, while the Manitoba Liberal Party holds three seats in Manitoba.

All content from Kiddle encyclopedia articles (including the article images and facts) can be freely used under Attribution-ShareAlike license, unless stated otherwise. Cite this article:
Canadian Prairies Facts for Kids. Kiddle Encyclopedia.