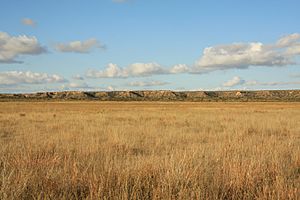 Shortgrass prairie of the Llano Estacado. 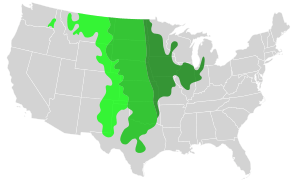 The shortgrass prairie is an ecosystem located in the Great Plains of North America. The prairie includes lands to the west as far as the eastern foothills of the Rocky Mountains and extends east as far as Nebraska and north into Saskatchewan. The prairie stretches through parts of Alberta, Wyoming, Montana, North Dakota, South Dakota, and Kansas, and passes south through the high plains of Colorado, Oklahoma, Texas, and New Mexico.

The prairie was formerly maintained by grazing pressure of American bison, which is the keystone species. The two most dominant grasses in the shortgrass prairie are blue grama (Bouteloua gracilis) and buffalograss (Bouteloua dactyloides), the two less dominant grasses in the prairie are greasegrass (Tridens flavus) and sideoats grama (Bouteloua curtipendula). Due to its semiarid climate, the shortgrass prairie receives on average less precipitation than that of the tall and mixed grass prairies to the east.

The shortgrass prairie has a long human history. The Kiowa, Comanche, and Arapahoe peoples occupied the land, hunting bison and pronghorn. Seasonally, these tribes would stage hunts in the adjacent mountains such as the Rocky Mountains. To manage the prairie these tribes and their predecessors likely used fire. They would create fuel breaks, a gap in vegetation or other combustible material that acts as a barrier to slow or stop the progress of a brushfire or wildfire. A firebreak may occur naturally in areas without vegetation or other fuel, such as a river, lake or canyon around their settlements. These fuel breaks would also entice large herbivores to patches of fresh new growth.

European explorers, trappers, and fur traders began to settle the shortgrass prairie. They developed an extractive economy that led to the later growth and industrialization of the prairie. In the mid- and late 19th century the railroads expanded transportation channels, helping to increase settlement, predominantly in rural and small towns. While more people began to settle in the prairie, large-scale cattle and sheep ranching increased as well. This later led to the development of gold, silver, and copper mining communities.

In the 1920s, El Niño played a big role in the success of crop growing in the short grass plains. El Niño caused more precipitation throughout the prairie, promoting plant growth. The success encouraged farmers to buy more efficient farming equipment. With the new equipment, farmers turned up the native land, exposing the soil. By the time the 1930s came around, it was too late to protect the soil with grass. The unprotected soil contributed to the Dust Bowl by being blown around and creating dust storms.

The Food Security Act of 1985 allowed for lower commodity prices and income supports. This Act also laid the foundation for the dairy herd buyout program. The Act made changes to several other USDA programs.

Farmers enrolled in the program agree to abolish environmentally destroyed land from agricultural production and cattle grazing to improve and regrow healthy grass and habitats in exchange for a yearly rental payment.

Today much of the shortgrass prairie is grazed by domestic livestock, with a human population that still is dependent upon agriculture. However, energy and mining exploration have increased. Over time, there has been a precipitous decline of many species, but inhabitants of the region today are demonstrating that sound land management practices can help sustain the native species, natural communities, and ecosystems.

The shortgrass prairie is a long thin stretch of territory that starts at the top of the country and makes its way to the bottom. Due to this, the climate varies from North to South, but is essentially the same from East to West. The temperature in the North is significantly colder on average then the temperature in the South. Also, there is more precipitation to the south, and more precipitation to the East. An interesting distinction about the shortgrass prairie compared to the tall and mixed grass prairies is that it has a one to two month summer drought, where the other two do not. This means that it also the driest prairie of the three. In addition, this region has various amounts of hailstorms, blizzards, tornadoes, and dust storms.

There are two significant population trends currently impacting the shortgrass prairie region. Firstly, the population in the region is decreasing, with many of those people moving westward. Additionally, more people are moving to metropolitan areas, and about three quarters of the population in this region live in those metropolitan areas. The human population today is still mainly dependent on agriculture, but fields such as energy exploration and mining have become more popular in the area. Due to the increase in people this has affected the ecosystem of the region and there has been a decrease of amount of species and diversity of those species.

The dry grasslands of the shortgrass prairie yield for extensive grazing operations. Typically cow-calf operations with the young animal sold for finishing in feedlots. Stocking rates and the economy in this region highly depend on the amount of precipitation, range conditions, and other environmental factors.

The shortgrass prairie is located on the western side of the Great Plains with the Colorado Rockies to its west and the mixed grass prairie to its east. However, it is pretty much impossible to define exact boundaries of the prairie. This is due to the shifting of plant communities over time and space because of the dynamics of grassland vegetation. So, the prairie extends to the eastern part of the Rocky Mountains to the west, up to Canada to the North, as far as Nebraska to the East, and as far as parts of Texas to the South. Those are just the general boundaries of the shortgrass prairie which is everything inside those said boundaries.

In Colorado, which contains a substantial portion of the shortgrass prairie biome, no legal ecosystem protection exists. More than 85% of prairie is privately owned and used for agriculture, particularly for dry land wheat, irrigated corn, soybeans and alfalfa. Roughly half of the original prairie extent is still present, however conservation in the long run is uncertain. Urban expansion is likely to continue having an impact. Climate change has less of an effect here than in other areas of Colorado due to the lower elevation, but can still be expected to affect the biome.

The Prairie Dog Coalition is a non- profit group of scientists, organizations and citizens who are fighting for the protection of prairie dogs and their environments. The alliance educates people on the declining populations of prairie dogs and engages with projects likely to destroy prairie dog habitat.

The Southern Plains Land Trust (SPLT) creates and protects a network of shortgrass prairie preserves to ensure the future of all native animals and plants in the region. As of 2019, over 25,000 acres are included in SPLT's preserve network.

The shortgrass prairie was once filled with huge herds of free-ranging bison and pronghorn. The prairie also teemed with large prairie dog colonies, deer and elk, and predators such as gray wolves and grizzly bears. The prairie is home to healthy populations of plains blue grama, a vast array of songbirds and raptors, carpets of buffalo grass and a broad diversity and abundance of wildflowers and butterflies. It was a landscape so teeming with life it has been compared to the South American Pampas. Today the most popular animal on the prairie is domestic cattle. The short grass prairie is used to having animals graze the land, so the pressure of grazing animals does not harm it. Pronghorn and prairie dogs still inhibit the prairie however, in fewer numbers. Top predators have been replaced by coyotes.

Ecological processes on a large-scale level such as climate, fire and grazing have strong influences in this system. Today, the shortgrass prairie has suffered the greatest biological destruction of any major biome in North America. The three central processes historically shaping the shortgrass prairie are herbivory, drought, and fire. Through habitat destruction, extermination of native herbivores and predators, proliferation of noxious weeds, and altered fire regimes have negatively been impacted.

The short grass prairie consists of different varieties of vegetation. Notably abundant grasses are blue grama (Bouteloua gracilis), sod- forming grass, and buffalo grass (Bouteloua dactyloides). Less prevalent is galleta grass (Hilaria). These grasses are native to the short grass prairie and therefore are drought and grazing resistant. Not many plant varieties appear in short grass prairies owing to its extreme changes in annual precipitation and temperature from one year to the next. Two of the main plants that are able to thrive are soap weed yucca (Yucca glauca) and plains prickly pear cactus (Opuntia). In the years of greater precipitation, otherwise dormant wildflowers bloom in the spring, quickly diminishing in the hotter and drier summer months.

The short grass prairie consists of many kinds of birds, reptiles and mammals. Most of these animals have adapted to living in such an open area, many having adapted to living under ground or traveling long distances to find shelter.

Round-tailed horned lizard, Texas garter snake, Texas horned lizard, Texas long-nosed snake and Western Massasauga are among the most dominant reptiles in the short grass prairie. Most of these animals are cold blooded, so in the winter months they live under ground until spring comes. 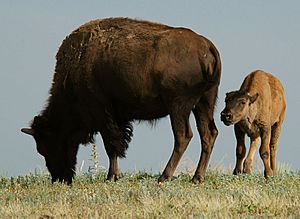 Mother and calf grazing on the prairie.

Cattle, pronghorn and white-tailed deer are the most abundant mammals on the short grass prairie today. Domestic cattle were placed in the prairie and have essentially replaced the native species that used to live in the short grass prairie such as bison and elk. In addition, the top predators used to be Gray wolf and Grizzly bear, but today, coyotes have replaced those animals.

Prairie dogs were once the most abundant animals in the short grass prairie, living in colonies across a range that historically spanned 11 states. Presently, prairie dogs are found in 1 percent of their former range. The decrease has been driven by poisoning campaigns, habitat disruption, and hunting. The decline in prairie dogs has significantly impacted many of the other animals that reside in the short grass prairie, including the black-footed ferret, whose diet relies on prairie dogs. Other animals negatively affected by the decline of prairie dogs are the mountain plover, swift fox, ferruginous hawk and the burrowing owl.

All content from Kiddle encyclopedia articles (including the article images and facts) can be freely used under Attribution-ShareAlike license, unless stated otherwise. Cite this article:
Shortgrass prairie Facts for Kids. Kiddle Encyclopedia.