The Texas horned lizard (Phrynosoma cornutum) is one of about 14 North American species of spikey-bodied reptiles called horned lizards, all belonging the genus Phrynosoma. P. cornutum ranges from Colorado and Kansas to northern Mexico (in the Sonoran desert), and from southeastern Arizona to Texas. Also, isolated introduced populations are found in the Carolinas, Georgia, and Florida. Most records of the Texas horned lizard (Phrynosoma cornutum) from the Piney Woods region of east Texas, Louisiana, and Arkansas are from the early and mid-twentieth century, a time when horned lizard were popular pets, and are thought to represent released or escaped pets and not the species natural range. Though some populations are stable, severe population declines have occurred in many areas of Texas and Oklahoma. The Texas spiny lizard (Sceloporus olivaceus) may be confused for a Texas horned lizard due to its appearance and overlaping habitat. 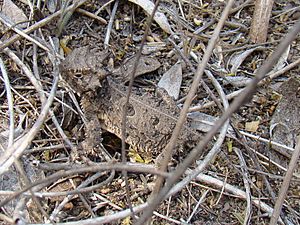 The horned lizard is popularly called a "horned toad", or "horned frog", but it is neither a toad nor a frog. The popular names come from the lizard's rounded body and blunt snout, which give it a decidedly batrachian appearance. Phrynosoma literally means "toad-bodied" and cornutum means "horned". The lizard's horns are extensions of its cranium and contain true bone. 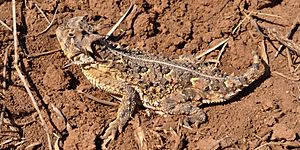 Although its coloration generally serves as camouflage against predation, when threatened by a predator, a horned lizard puffs up and appears very fat, which causes its body scales to protrude, making it difficult to swallow. The Texas horned lizard, along with at least three other species of the genus Phrynosoma, also has the ability to squirt an aimed stream of blood from the corners of the eyes and sometimes from its mouth for a distance up to 5 ft (1.5 m). They do this by restricting the blood flow leaving the head, thereby increasing blood pressure and rupturing tiny vessels around the eyelids. This not only confuses would-be predators, but also the blood is mixed with a chemical that is foul-tasting to canine predators such as wolves, coyotes, and domestic dogs. This novel behavior is generally observed to be very effective in defense; however, it appears to have no effect against predatory birds.

About 70% of the Texas horned lizard's diet is made up of harvester ants, though they supplement these with termites, beetles, and grasshoppers. In recent years, the species has declined by about 30% of its range, though it may be making a comeback. The decline is usually blamed on overuse of pesticides and the spread of nonnative, highly aggressive and fiercely territorial red imported fire ants. Both eradicate harvester ant colonies, destroying the lizard's principal source of food. The Texas horned lizard is now a protected species, and, in Texas, it is illegal to take, possess, transport or sell them without a special permit.

A University of Texas publication notes that horned lizard populations continue to disappear throughout the southwest despite protective legislation. The Texas horned lizard has disappeared from almost half of its geographic range. Population declines are attributed to loss of habitat, human eradication of the ant populations upon which the lizards prey, displacement of native ant populations by invading fire ants (aided by synergistic effects of native ant eradication), and predation by domestic dogs and cats.

In 2014, the Center for Biological Diversity in Tucson, Arizona petitioned the Oklahoma Department of Wildlife Conservation to have the Texas horned lizard put on the endangered species list due to the massive declines of its population in Oklahoma, where it was once plentiful. The Center said it may later seek protection for the animal on a Federal level; it also said that reptiles in general are dying off at up to 10,000 times their historic extinction rate, greatly due to human influences.

In Texas, the creature has been declared threatened and a breeding and reintroduction program has been started by the Fort Worth Zoo. Hatchlings are bred and released in targeted areas in the hope that with a large number of animals, enough will survive to grow the population in the wild. Typically in such reptile reintroduction programs, less than one percent of a female's offspring will survive in the wild to adulthood. 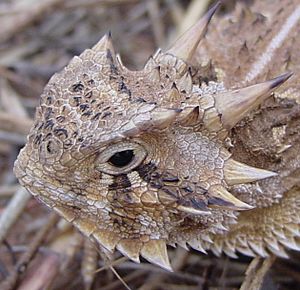 Texas horned lizard (Phyrnosoma cornutum), close up of the head

Horned lizards are studied by researchers at Texas Christian University, the nearby Fort Worth Zoo, and Dallas Zoo with raw data and fieldwork done by state employees. Since 2010, the Dallas Zoo has been conducting a mark-and-recapture study on Texas horned lizards on the Rolling Plains Quail Research Ranch, a 4,700-acre preserve located in Fisher County, Texas. Dallas Zoo researchers capture animals, tag them, collect data, and release them. The project's goals are aimed at shedding light on the life history, population density, and determining ecological conditions best suited for this threatened species. Further research toward their preservation is funded by sale of horned lizard "Keep Texas Wild" license plates.

In addition, the Dallas Zoo and Houston Zoo are working to establish a captive colony of animals with several key reproductive successes taking place in 2015.

Research aimed at preservation has revealed the Texas horned lizard is extremely genetically diverse, and isolated pockets of genetically distinct subspecies have been found throughout Texas. Though each of these subspecies is physically identical to all other subspecies, they are likely specifically adapted for the region in which they are found. This makes it difficult to know how one subspecies would survive if it were reintroduced into a new area.

The most numerous and widespread subspecies of Texas horned lizard is found in the Panhandle region of Texas. Other distinct subspecies have been identified in East Texas, the Hill Country, and along the coastline. It is not known whether these subspecies can reproduce with one another over the long term, making preservation of all of the subspecies even more crucial to the animals' preservation. It is also unknown whether any of these subspecies will show a particular resistance to the pesticides and fire ants threatening them.

In Native American religion and art

All content from Kiddle encyclopedia articles (including the article images and facts) can be freely used under Attribution-ShareAlike license, unless stated otherwise. Cite this article:
Texas horned lizard Facts for Kids. Kiddle Encyclopedia.