Grande Prairie is a city in northwest Alberta, Canada within the southern portion of an area known as Peace River Country. It is located at the intersection of Highway 43 (part of the CANAMEX Corridor) and Highway 40 (the Bighorn Highway), approximately 456 km (283 mi) northwest of Edmonton. The city is surrounded by the County of Grande Prairie No. 1.

Grande Prairie was the seventh-largest city in Alberta in 2016 with a population of 63,166, and was one of Canada's fastest growing cities between 2001 and 2006.

The city adopted the trumpeter swan as an official symbol due to its proximity to the migration route and summer nesting grounds of this bird. For that reason, Grande Prairie is sometimes nicknamed the "Swan City". The dinosaur has emerged as an unofficial symbol of the city due to paleontology discoveries in the areas north and west of the Grande Prairie.

Grande Prairie was named for the large prairie which lies to the north, east, and west of it. In the 18th century, the prairie was occupied by bands of the Dane-zaa (Beaver) peoples, who began trading with the North West Company at Dunvegan in the early 19th century. The earliest recorded reference to the prairie was by trader Samuel Black in 1824. In 1880, a Hudson's Bay Company post called La Grande Prairie was established by George Kennedy 15 miles (24 km) northwest of the present city. In the late 19th century, the prairie was settled by Cree and Iroquois from around Jasper and Lac Ste. Anne. When 17 townships were surveyed for homesteading in 1909, a land rush soon followed, with many settlers arriving over the Edson Trail. In 1910, the Grande Prairie Townsite was sub-divided. By 1912, it included a bank, hotel, post office, and land office, making it a district metropolis. In 1916, it became the terminus of the Edmonton, Dunvegan and British Columbia Railway from Edmonton. 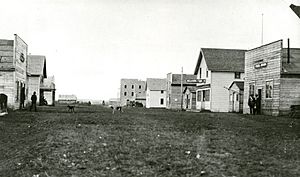 A view of downtown Grande Prairie, circa 1914

The Edson Trail from Edson to Grande Prairie was opened in 1911 as a means for settlers to reach the Grande Prairie area. It was basically nothing more than a tract of clear cut bush and forest, and thus was a very difficult route for many settlers, especially during wet weather. Because of this, large scale settlement came late compared to other major farming regions further south in Canada. Grande Prairie was incorporated as a village by the Province of Alberta in 1914. It was not until the arrival of the railway in 1916 that farmland quickly expanded as waves of settlers came into the Peace region. This drove up Grande Prairie's population past the 1,000 mark, allowing it to incorporate as a town on March 27, 1919. A local recession in the 1920s caused a temporary depopulation of Grande Prairie. But the population rebounded afterwards by the 1930s, by which time the population had reached 1,464. Settlement continued unabated even into the 1930s during the Dust Bowl era because the Peace Region was able to escape the severe drought conditions that plagued the Canadian Prairies further south at the time.

The Second World War saw the US and Canadian military establish Grande Prairie as a part of the Northwest Staging Route for the construction of the Alaska Highway from Dawson Creek to Alaska. Although Dawson Creek was chosen as the major starting point of the construction of the Alaska highway, Grande Prairie was a major stopover point for military aircraft during the war, and benefited economically from this.

Although Grande Prairie was well located in the southern edge of the Peace Country, it was competing with the towns of Peace River and Dawson Creek for the title of the most important centre of commerce and agriculture in the region until the late 1950s, when its population growth began to outstrip these towns as oil and natural gas exploration was underway in the Peace Region, especially since the first major discovery of oil further south in Leduc near Edmonton in 1947 and the construction of a large pulp mill in the early 1970s.

The construction and paving of Highway 43 (originally sections of Highways 2, 34, and 43 from the BC border to the Yellowhead Highway just west of Edmonton) in 1956 cut down on the travel time by road significantly, further enhancing Grande Prairie's accessibility and economic status. The town was incorporated as a city in 1958. At that time, its population was approximately 7,600.

The opening of the Procter & Gamble kraft pulp mill in 1972 and the discovery of the Elmworth deep basin gas field spurred an economic boom. Grande Prairie's population went from just over 12,000 in the early 1970s to over 24,000 by the time the oil boom went bust in 1981.

A tornado struck the downtown area and east side of Grande Prairie on July 8, 2004. Although the tornado was considered a very weak one (F0-F1 on the Fujita scale) and the weather was not severe at the time, it was still strong enough to incur damage to houses and flip vehicles over. There were no casualties or fatalities.

Aerial view of Grande Prairie and farmland to the north

Grande Prairie is located just north of the 55th parallel north, and is 465 km (289 mi) northwest of Edmonton, lying at an elevation of 669 metres (2,195 ft) above sea level. The city is surrounded by farmland to the north, east, and west. To the south lies a vast boreal forest with aspen, tamarack, lodgepole pine, jack pine, and black spruce extending well into the foothills of the Canadian Rockies south and southwest of the city.

The city lies on the southern edge of aspen parkland, which is a transitional biome between boreal forest and prairie. The Peace Country contains the northernmost area of aspen parkland in North America. However, much of the aspen parkland in the region has long since been destroyed by extensive farming and oil/gas drilling activity.

Grande Prairie has a northern continental climate typical of northwestern Alberta and northeastern British Columbia, classified as humid continental (Dfb), bordering closely on a subarctic climate (Dfc) under the Köppen climate classification. Winters are generally very cold with some mild spells. Summers are often fairly cool to pleasantly warm in the daytime, but nights can be cool despite the long summer days typical for its latitude. Hot days over 30 °C (86 °F) are rare, occurring on average, only two to three days a year, which is not unexpected this far north. Winter conditions can vary tremendously from year to year. Winters have been known to be mild enough to produce "brown Christmas" conditions, where little or no snow may fall until after Christmas due to unusually mild early winter conditions.

Summers can bring thunderstorms, although they are not as frequent nor as severe as those further south in Central Alberta. Rainfall can vary from year to year, but the Peace Region is noted for never having experienced truly severe drought conditions more typical of Southern Alberta and neighbouring Saskatchewan. Tornadoes are rare but not unheard of in the Peace Region and, as noted above, a weak tornado actually struck the core of the city in 2004.

A neighbourhood in Grande Prairie

Live music can be found in several downtown bars and intermittently at all-ages locations such as Tito's Restaurant and the GP Curling Club. Summer-long music festivals have been organized by community-minded individuals and charitable organizations. Grande Prairie has a wide range of local music genres including country (such as Tenille, Brad Sims, and more), Reggae (Tasman Jude ), Metal (Arrival Of Autumn ), folk, rock and much more

The Reel Shorts Film Festival is a five-day international festival of short films in Grande Prairie that takes place at Grande Prairie Live Theatre's Second Street Theatre in early May.

The city has a number of parks and golf courses, including the large Muskoseepi Park in the Bear Creek valley and the Dunes Golf Course south of the city. Muskoseepi Park has excellent bike trails extending nearly the entire length of Bear Creek within the city. The park also has an outdoor swimming pool (currently closed) and an outdoor pond which converts into a skating rink in the winter. Crystal Lake in the northeast part of the city also has parkland, preserved wetlands (great for birdwatching), and walking/bike paths around its entire circumference.

Grande Prairie has three 18-hole golf courses nearby including The Dunes Golf and Winter Club, the Bear Creek Golf Club, and the Grande Prairie Golf and Country Club), and a fourth, Grovedale Golf Course, approximately 20 km (12 mi) to the southwest of Grande Prairie.

Cross-country skiing and snowmobiling are popular activities during the winter in the Grande Prairie area. A local ski hill called Nitehawk is located south of the city on the south bank of the Wapiti River. Aside from skiing, Nitehawk also has the only North American natural luge track certified for international events and over the summer months freestyle ski jumpers can practice using the Northern Extreme water ramp facility. It is also active in luge as a naturally refrigerated venue, hosting the FIL World Luge Natural Track Championships in 2007.

The foothills south of Grande Prairie and around Grande Cache are popular year-round for hiking in the summer and for snowmobiling and other winter sports in the winter. Kakwa Wildland Park on the Alberta-BC border, about 180 kilometres (110 miles) south of the city, is a beautiful and mountainous natural area and is known for a beautiful waterfall called Kakwa Falls.

The Eastlink Centre, briefly known as the Multiplex, is an indoor fitness facility that has an indoor pool, splash park, lazy river, and surf simulator. It also includes a weight room and fitness classes, a daycare service and a multi-use basketball court among other amenities and classes. The Eastlink Centre is located in southwest Grande Prairie and connects St. Joseph High School, the Grande Prairie Gymnastics Centre, and the Coca-Cola Centre. In March 2012 the Eastlink Centre received an award for its exceptional accessibility features.

The Leisure Centre, formerly the Rec-Plex, is located in northwest Grande Prairie near the Bear Creek Reservoir. In December 2011, after the Eastlink Centre opened, the majority of the Leisure Centre was closed, with unrealized plans to reopen in the second half of 2013. Currently the swimming pool and gym remain closed, but the indoor soccer pitch is open.

All content from Kiddle encyclopedia articles (including the article images and facts) can be freely used under Attribution-ShareAlike license, unless stated otherwise. Cite this article:
Grande Prairie Facts for Kids. Kiddle Encyclopedia.