Fort McMurray ( mik-MURR-ee) is an urban service area in the Regional Municipality (RM) of Wood Buffalo in Alberta, Canada. It is located in northeast Alberta, in the middle of the Athabasca oil sands, surrounded by boreal forest. It has played a significant role in the development of the national petroleum industry. The 2016 Fort McMurray wildfire led to the evacuation of its residents and caused widespread damage. 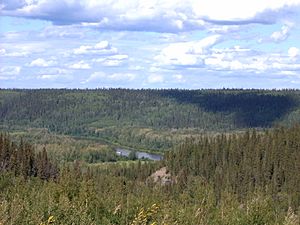 View of the Clearwater River valley from Highway 63

Before the arrival of Europeans in the late 18th Century, the Cree were the dominant First Nations people in the Fort McMurray area. The Athabasca oil sands were known to the locals and the surface deposits were used to waterproof their canoes. In fur trade days the location of Fort McMurray was an important junction on the fur trade route from eastern Canada to the Athabasca country. In 1778, the first European explorer, Peter Pond, came to the region in search of furs, as the European demand for this commodity at the time was strong. Pond explored the region farther south along the Athabasca River and the Clearwater River, but chose to set up a trading post much farther north by the Athabasca River near Lake Athabasca. However, his post closed in 1788 in favour of Fort Chipewyan, now the oldest continuous settlement in Alberta.

In 1790, the explorer Alexander MacKenzie made the first recorded description of the oil sands. By that time, trading between the explorers and the Cree was already occurring at the confluence of the Clearwater and Athabasca Rivers. The Hudson's Bay Company and the North West Company were in fierce competition in this region. Fort McMurray was established there as a Hudson's Bay Company post by 1870, named for Factor William McMurray. It continued to operate as a transportation stopover in the decades afterwards. The Alberta and Great Waterways Railway arrived in 1915 complementing existing steamboat service.

The community has played a significant role in the history of the petroleum industry in Canada. Oil exploration is known to have occurred in the early 20th century, but Fort McMurray's population remained small, no more than a few hundred people. By 1921, there was serious interest in developing a refining plant to separate the oil from the sands. Alcan Oil Company was the first outfit to begin bulk tests at Fort McMurray. The nearby community of Waterways was established to provide a terminus for waterborne transportation, until 1925, when the Alberta and Great Waterways Railway reached there.

Abasands Oil was the first company to successfully extract oil from the oil sands through hot water extraction by the 1930s, but production was very low. Fort McMurray's processing output gradually grew to over 1,100 barrels/day by World War II, and Fort McMurray was set up by the US and Canadian forces as staging ground for the Canol project.

Fort McMurray and Waterways amalgamated as the village of McMurray (the "Fort" was dropped until 1962, when it was restored to reflect its heritage) by 1947, and became a town a year later. Fort McMurray was granted the status of new town so it could get more provincial funding. By 1966, the town's population was over 2,000.

In 1967, the Great Canadian Oil Sands (now Suncor) plant opened and Fort McMurray's growth soon took off. More oil sands plants were opened up, especially after 1973 and 1979, when serious political tensions and conflicts in the Middle East triggered oil price spikes. The population of the town reached 6,847 by 1971 and climbed to 31,000 by 1981, a year after its incorporation as a city.

The city continued to grow for a few years even after the oil bust caused by the collapse in world oil prices. The population peaked at almost 37,000 in 1985, then declined to under 34,000 by 1989. Low oil prices since the oil price collapse in 1986 slowed the oil sands production greatly, as oil extraction from the oil sands is a very expensive process and lower world prices made this uneconomical. Oil price increases since 2003 made oil extraction profitable again for around a decade, until another slump in oil prices which began in December 2014 and deepened in 2015 resulted in layoffs and postponement of projects.

On May 3, 2016, at 5:00 pm MDT a large wildfire burning southwest of Fort McMurray resulted in the mandatory evacuation of 12 communities in the city's area. Later that evening, all of Fort McMurray was placed under a mandatory evacuation. Record-breaking temperatures, reaching 32.8 °C (91 °F), low relative humidity and strong winds contributed to the fire's rapid growth in forests affected by "an unusually dry and warm winter".

About one-fifth of homes in the city were reported to be destroyed in the fire. 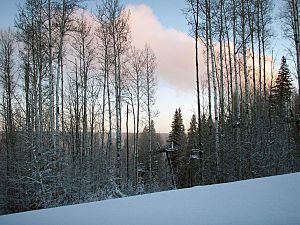 Fort McMurray is 435 kilometres (270 mi) northeast of Edmonton on Highway 63, about 60 kilometres (37 mi) west of the Saskatchewan border, nestled in the boreal forest at the confluence of the Athabasca River, the Clearwater River, the Hangingstone River, and the Horse River. It sits at 370 metres (1,210 ft) above sea level. Fort McMurray is the largest community in the Regional Municipality of Wood Buffalo.

White spruce, trembling aspen, balsam poplar and white birch are the most prominent native trees in and around town. Black spruce and tamarack occur in poorly drained areas and jack pine may be seen on the driest sites. European aspen, blue spruce and sand cherry are among the exotic trees occasionally seen.

With severe winters except during periods of warming chinook winds, mild to warm summers and only three months whose average temperature is higher than 10 °C (50 °F), Fort McMurray has a borderline subarctic climate (Köppen climate classification Dfc), very slightly below to be considered a humid continental climate as May averages 9.9 °C (49.8 °F); and falls into the NRC Plant Hardiness Zone 3a.

The community lies at a lower elevation than most other parts of Alberta, so under the right conditions it can be a “hot spot” for Alberta, or even all of Canada (as in April 1980 when its daily mean temperature of 10 °C (50 °F) was unsurpassed by any other Canadian station). 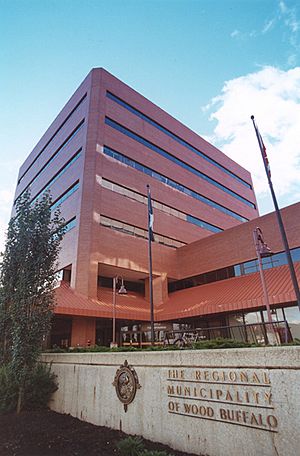 Fort McMurray is a multicultural community, attracting people from all corners of Canada and the world. Generally, moves to Fort McMurray have increased in the last decade. Still, Albertans make up almost half the number of migrants to Fort McMurray, followed by 17% of people originating from the province of Newfoundland and Labrador.

Fort McMurray is considered the heart of one of Alberta's (and Canada's) hubs of petroleum production, located near the Athabasca oil sands. Besides the oil sands, the economy also relies on natural gas and pipeline transport, forestry and tourism. Oil sands producers include Syncrude, Suncor Energy, Canadian Natural Resources, and CNOOC Petroleum North America ULC. Fort McMurray's growth is characteristic of a boomtown. Housing prices and rents are far higher in Fort McMurray than most such remote areas, and in 2006, Fort McMurray had the highest prices in Alberta. The Alberta government has promised to release more Crown land for residential construction, particularly in Timberlea on the north side. 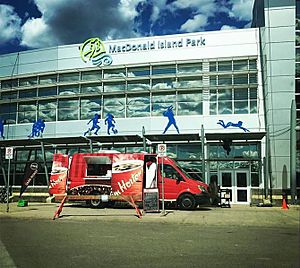 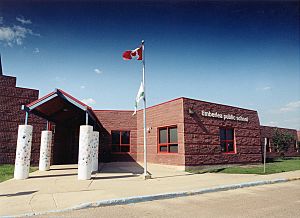 The Fort McMurray Public School District (FMPSD) and Catholic School District both serve the primary, elementary, and secondary education needs of students in Fort McMurray. Each school district offers diverse programs like French immersion, performing arts or a dedicated technology and science lab, however only FMPSD offers the Advanced Placement program at one of their schools, being Westwood Community High School.

On Abasand Drive, École Boréal is the only francophone school in the area and goes from pre-kindergarten to grade 12.

Keyano College is a publicly funded college and vocational institute based in the area and plays a role in training workers for the oil sands. Known as the cultural hub of the Regional Municipality of Wood Buffalo, Keyano College contains both a state-of-the-art theatre and recital hall, hosting a variety of musical and theatrical events that attract upwards of 50,000 visitors each season. 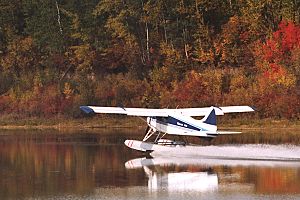 Float plane taking off at the Snye 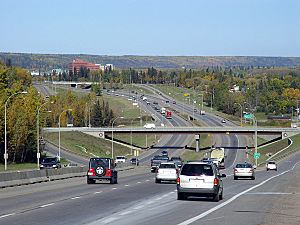 See also: List of airports in the Fort McMurray area

There are several airports in the area, with Fort McMurray International Airport being the largest in northern Alberta. It is serviced by Air Canada, Air Canada Express, McMurray Aviation, Northwestern Air, WestJet and WestJet Encore, with scheduled flights to Calgary, Edmonton, Fort Chipewyan, Fort Smith, and Toronto. The airport is also serviced by various oil companies with corporate and charter flights heading north to private airstrips at oil sands operations. Flights are frequently booked to capacity because of the high transient worker population and workers who commute to Fort McMurray from other parts of Canada.

Ebus and Red Arrow operate scheduled passenger bus services to Edmonton and other communities along Highway 63, as well as other destinations farther south.

Highway 63 is the only highway between Fort McMurray and Edmonton. Due to the industrial demands of the oilsands, Highway 63 boasts some of the highest tonnage per kilometre in Canada, and the largest and heaviest loads that trucks have ever carried. Highway 63 was fully twinned in May 2016. Highway 881 also provides access to the region from Lac La Biche.

Canadian National Railway (CN) discontinued the Muskeg Mixed (mixed train) to Fort McMurray in 1989, and there has been no passenger rail service since. CN continues to operate freight service on its line Lac La Biche and points beyond.

Canada Post identified Fort McMurray as "having a particularly high cost to serve" in January 2014, and planned to institute a surcharge of $5.00 for all parcels shipped to the area. However, the postal service retracted this decision before the rate change went into effect.

All content from Kiddle encyclopedia articles (including the article images and facts) can be freely used under Attribution-ShareAlike license, unless stated otherwise. Cite this article:
Fort McMurray Facts for Kids. Kiddle Encyclopedia.