Anzac is a hamlet in northern Alberta, Canada within the Regional Municipality (RM) of Wood Buffalo. It is located on Highway 881 along the east shore of Gregoire Lake, approximately 36 kilometres (22 mi) southeast of Fort McMurray. 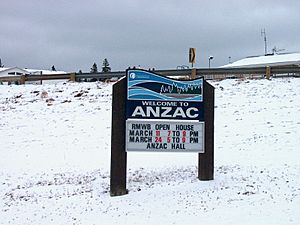 Anzac was named for the Australian and New Zealand Army Corps who surveyed the area during World War I for construction of the rail line to Waterways.

Originally named after Willow Lake, the previous name of Gregoire Lake, the community were mostly non-status or non-treaty Cree Indians whose forefathers had migrated to the Athabasca Basin area from what was to become northern Manitoba; mostly displacing the original Beaver and Chipewyan occupants of the area.

During World War II a road was built from the rail siding to service and construct an American army base on Stoney Mountain.

The area has seen significant growth corresponding to that of Fort McMurray and the oil industry.

The hamlet was ordered to be evacuated on May 5, 2016 due to the spread of the 2016 Fort McMurray wildfire.

The permanent population of Anzac in 2015 was 606, with a shadow population of 157, for a total of 763, according to a municipal census conducted by the RM of Wood Buffalo.

All content from Kiddle encyclopedia articles (including the article images and facts) can be freely used under Attribution-ShareAlike license, unless stated otherwise. Cite this article:
Anzac, Alberta Facts for Kids. Kiddle Encyclopedia.