Kids Encyclopedia Facts
This page is about the town. For the lake, see Sylvan Lake (Alberta).

Sylvan Lake is a town in central Alberta, Canada. It is located 25 kilometres (16 mi) west of the City of Red Deer along Highway 11 or Highway 11A. It is situated on the southeast edge of Sylvan Lake, a 15 kilometres (9.3 mi) long freshwater lake, in Red Deer County.

The lake is a popular destination for tourists from around Alberta, with over 1.5 million visitors each year. Popular tourist activities include sunbathing, swimming, water-skiing, and visiting Camp Woods in Sylvan Lake played to the 12th Canadian Scout Jamboree in July 2013.

Sylvan Lake was originally settled by French speaking immigrants from Quebec and the United States. Arriving in 1898 from Michigan, Alexandre Loiselle and his family homesteaded the quarter section that later became the west side of today's Main (50th) Street and the businesses and homes immediately to the west. When the first settlers arrived at Sylvan Lake in 1899, the lake was named Snake Lake from the Indian name Kinabik, which referred to the numerous garter snakes in the area. The name was officially changed to Sylvan Lake in 1903 (Gaetz 1948). "Sylvan" is from the Latin sylvanus, which means "of a forest". 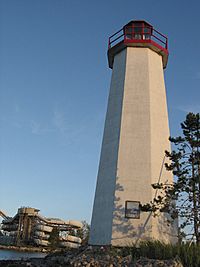 In the early twentieth century, groups of Estonian and then Finnish settlers moved to homesteads to the south and west of the fledgling settlement at Sylvan Lake. With their arrival came the early business community, a general store, a blacksmith, a hardware store, post office, barber, and restaurants. The completion of the Canadian Northern line to Rocky Mountain House and Nordegg in 1912 and the parallel Canadian Pacific in 1914 opened the west country to settlement and resulted in the incorporation of Sylvan Lake in 1913 under Mayor E. S. Grimson, a local hardware store owner. The anniversary of the founding of the town is celebrated every year in Sylvan Lake as "1913 Days".

Farming quickly became a mainstay in the area and in 1923 an Alberta Pacific grain elevator was built on the CPR line immediately north of what is now Cottonwood Estates. The elevator was torn down in the 1970s and the CPR line was abandoned in 1983 and removed in 1986. Since then, the right of way has survived as a natural area and walking path through Sylvan Lake.

Elevators were also constructed along the CN line and were used by local farmers in the mid-century decades. They were torn down in the late 1990s.

Even prior to the building of the railways, Sylvan Lake was becoming a summer resort for families in Red Deer. With the coming of the trains, "the Lake" became a favourite of families from both Edmonton and Calgary. The summer visitors camped in tents, but soon the "Cottage Area" east of 46 Street and in "Lower Camp" on the southeast shore began to fill with summer cottages. In the 1930s and 1940s people began arriving by car and the areas around Norglenwold, Sylvan Lake Provincial Park and Jarvis Bay Provincial Park began to fill up with summer visitors.

The influx of summer residents and visitors also brought businesses and services that catered to the ever increasing number of tourists. In 1913, the first motor launch took paying passengers on tours around the lake. A large boathouse was constructed in 1926, allowing visitors to rent a boat, canoe, swimsuit, or buy ice cream, pop and other items necessary to a summer day at the lake. Regattas were held on the lake for a number of years beginning in 1923.

In 1928, the Dominion Government, assisted by the Sylvan Lake Women's Institute (WI), built the long pier that jutted out into the lake from the bottom of Main Street. This pier was connected to the earlier WI Pier and formed a square area used for swimming and mooring boats. The first "waterslide" at Sylvan Lake was part of this facility. The piers were prone to ice damage over the winter and were replaced by the existing "landfill" that now hosts beach volleyball tournaments, dragon boat racing and the lake tour on the "Zoo Cruise".

In 1983, the original waterslide was replaced by the Wild Rapids Waterslides, which is the largest facility of its kind in western Canada.

Another byproduct of losing the piers and later the government boat launch was the construction of the Sylvan Lake Marina, home of many of the permanent boats on the lake, boating facilities, and the Sylvan Lake lighthouse.

In 2014, Sylvan Lake won the Kraft Hockeyville contest, which included a large cash prize and the rights to host an NHL pre-season game between the Calgary Flames and the Arizona Coyotes.

The Town of Sylvan Lake is located on the southeast shore of Sylvan Lake. The summer villages of Norglenwold and Jarvis Bay border the town to the northwest and northeast respectively.

The population of the Town of Sylvan Lake according to its 2015 municipal census is 14,310, a 10% change from its 2013 municipal census population of 13,015. At its current population, Sylvan Lake is one of the largest towns in the province and is eligible for city status. According to Alberta's Municipal Government Act, a town is eligible for city status when it reaches 10,000 residents.

All content from Kiddle encyclopedia articles (including the article images and facts) can be freely used under Attribution-ShareAlike license, unless stated otherwise. Cite this article:
Sylvan Lake, Alberta Facts for Kids. Kiddle Encyclopedia.