Innisfail /ˈɪnᵻsfeɪl/ is a town in central Alberta, Canada. It is located in the Calgary-Edmonton Corridor, south of Red Deer at the junction of Highway 2 and Highway 54. 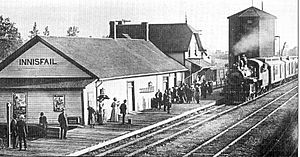 Railway station in the 1890s

The town's name comes from an Irish-language epithet for Ireland, Inis Fáil, "Isle of Destiny". Before this name was adopted, the town was often referred to as "Poplar Grove". Sandy Fraser, Napoleon Remillard, Arthur Content and Bill Kemp settled in the area from 1884-1887. These were Innisfail’s first settlers. Dr. Henry George was an important physician and coroner for Calgary and Central Alberta. He settled in Innisfail and built a house he called “Lindum Lodge” (this is where the Dr. George/Kemp house is today). Later the house was occupied by Bill Kemp and Kate Jane Kemp, who ran it as a boarding house until the 1960s. More people continued to move to the Innisfail area. The construction of the railroad attracted more settlers and business. One of the first businessmen in the area was G. W. West. He is very important to Innisfail’s past as he ran a general store, meat market, and grocery store. He was Innisfail’s first proprietor when he moved here in 1891. By the 1900s, Innisfail was a village. Some of the early businesses included the Union Bank, the Murray Hotel, Hotel Alberta, the New York Café, the Modern Café, the Paris Café, the Opera House and the West Store.

All content from Kiddle encyclopedia articles (including the article images and facts) can be freely used under Attribution-ShareAlike license, unless stated otherwise. Cite this article:
Innisfail, Alberta Facts for Kids. Kiddle Encyclopedia.