Ryley is a village in central Alberta, Canada. It is located in Beaver County, along Highway 14 between the City of Edmonton and the Town of Viking. The City of Camrose is approximately 58 km (36 mi) south of Ryley. The village was named in 1908 after George Urquhart Ryley, Grand Trunk Pacific Railway Land Commissioner at the time.

Ryley boasts many facilities, such as Alberta's only indoor swimming pool in a village, a school which operates four days a week, a museum, a three-sheet indoor curling rink, an outdoor skating rink, a skate park, and a community hall. 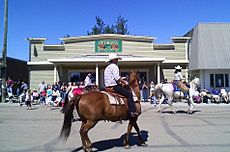 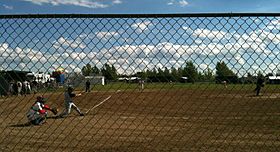 All content from Kiddle encyclopedia articles (including the article images and facts) can be freely used under Attribution-ShareAlike license, unless stated otherwise. Cite this article:
Ryley Facts for Kids. Kiddle Encyclopedia.