Barrhead is a town in central Alberta, Canada, within the County of Barrhead No. 11. It is located along the Paddle River and at the intersection of Highway 33 (Grizzly Trail) and Highway 18, approximately 120 km (75 mi) northwest of the City of Edmonton. It is also located along the route of the Express Trail, used by the North West Company. Originally a First Nations trail that was widened by George Simpson and John Rowand to save the North West Company over $5,000.

The town was named after the Scottish town Barrhead, the birthplace of one of the children of the area's early settlers, James McGuire. Barrhead's official bird is the great blue heron.

During the late 19th century and the early 20th century, Barrhead played an important role in the settlement of northwest Alberta. Highway 33, known as the Grizzly Trail, follows the original Express Trail, which was the shortest route to the Yukon during the Gold Rush years. Once established, this route was key to the settlement of the Peace River region. The old Barrhead town site, 3 km north of the present Town Centre, was a frequent stop over for the few Klondikers and others who needed supplies for the rigorous journey north.

Originally established in 1906, Barrhead's position as a major trade centre on the historic Express Trail gave it a significant role in the settlement of north-western Alberta. It was a vital link in the trade route from Fort Edmonton to the Yukon. James McGuire, the child of one of the first settlers in the area, named Barrhead after his hometown in Scotland. Today, the community's rich history can be revisited through a collection of artifacts at the Barrhead and District Museum. The museum also houses a large display of African taxidermy, as well as the Barrhead Visitor Information Centre, which is open from May to September. The great blue heron is another prominent figure in local lore, is often spotted along the shores of the Paddle River and local lakes, and is the town's official animal. A statue of the bird is situated next to the Community Gazebo that marks the town centre and miniatures of the bird adorn the street posts.

The area was a quiet land of rolling hills well covered with stands of poplar, birch, pine and spruce trees on the higher ground with the low areas filled with willow and tamarack. The area has always been sparsely populated, with Cree natives passing through the region for the last 5000 years mainly settling around the different lakes in the region (such as Shoal Lake). In 1810 a First Nations trail was explored by David Thompson to connect the North Saskatchewan with Athabasca Pass, creating the first Canadian Transcontinental connection. In 1811 the first letter ever delivered from British Columbia to Montreal passed through this trail and its importance as a communication and trade route began to grow. In 1824, at the request of Gov. George Simpson the trail was widened from Fort Assiniboine to Fort Edmonton passing one mile (1.6 km) east of the present town, to accommodate the increased traffic along to route (as much as 75 horses or more a day). Some of the larger pack trains had over a hundred head of horses. The Cree natives and trappers moved across the area as they went about their business. As the First Nations peoples trapped a greater number of beavers and broke a number of dams the express trail (the Klondike trial) became flooded and partially abandoned until 1898. During the gold rush some Klondikers attempted to use the trail, although most preferred the drier route that was established heading up to Athabasca Landing. The pack-trail was widened to allow teams of horses and wagons, loaded high with provisions, to carry gold seekers north. Homesteaders soon followed. Surveys of the land took place in 1906 and 1907 and the pioneers applied for quarters (160 acres) of land. Trading posts were busy on both the Pembina and Athabasca rivers. A small store in the log home of Percy and Mary Johnstone (2 miles north and 1-mile (1.6 km) east of town) was in operation. Andy Tuttle lived 1.5 miles (2.4 km) to the south and helped many settlers as they arrived.

A post office named Paddle River was opened on Ted Speck's farm, one mile (1.6 km) southeast of town on the south side of the river in 1907. A store in Josh Cason's house, south and west of town, was operating in 1908 and a lean-to on the side provided a room for a school. Hugh Critchlow had taken land a mile north of Specks', along the Express Trail in 1907. Soon the Speck brothers (Ted and Fred) had built a bridge across the river and a sawmill was in operation on the north side. Cason and Critchlow partnered to build a store at Critchlow's in 1910 and the post office was moved there. A hall had been built just across the trail where school was held from 1909 to 1911. A blacksmith shop and a merry-go-round type swing completed the busy centre where nearly a hundred people attended the picnic in 1909. Rev. Seymour Dallas applied for a ten-acre cemetery plot (which is currently East Lawn Community Cemetery) and in 1913 the Anglican Church was built there. The church was subsequently moved to town in 1928 and then moved to Thunder Lake in 1967. 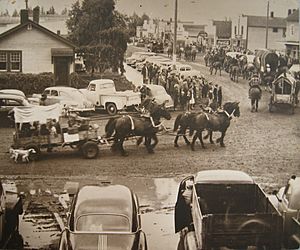 The Paddle River Co-operative Society was formed in 1912 and opened a store in the old Johnstone building northeast of Barrhead in 1913. They immediately began construction on a new two-story building that would have room for community gatherings upstairs. Application was made for a post office, which required that they choose a name. The McGuire family suggested the name of their home town in Scotland and soon the Barrhead, Alberta, post office opened in the store on January 1, 1914.

The Finch family built a stopping house which still stands nearby. The North-West Mounted Police built a barracks and the hall was moved over from the southern location (2.5 miles). A blacksmith shop and a garage were built on the other corner of the intersection and various families bought lots and built homes. The bus service to Edmonton was started in 1926 and the Toronto Dominion/TD Canada Trust bank was opened in the stopping house. The children went to school at Glenreagh, two miles (3 km) west. The community applied to have the railway brought here from Busby and landowners hoped to sell right-of-way.

In 1907, Albert Shelton and family homesteaded the quarter that Barrhead's main street is on. He built a house, barn, dug a well and did some fencing, mostly in the northeast corner of the quarter, the highest area of land. The Shelton's moved away in 1912 leaving the quarter vacant and by 1927 the land was cheap so the Northern Alberta Railways agreed to bring the Pembina Valley branch line to this quarter. The Barrhead people then scrambled to move their homes, the garage and the store to this new location, where four elevators were already being built. The pattern of the streets and lots were carefully laid in relation to the railway tracks and buildings went up in rapid succession. The pattern chosen for the lots is still used today. In no time at all, businesses were in operation; from grocery and hardware stores, a drug store, restaurant, hotel, real estate office, butcher shop, livery barn, etc. to another, which was the United Church. Ted Hooper supplied electric lights. The incorporation of the village took place in November 1927. A seven- or eight-bed hospital opened that fall on the corner of 49A Street and Railroad Avenue. A new hospital was built across the main road (Highway 33) in 1934.

The school was built and opened in 1928; a two-room building that needed another building for the High School by 1929. Around this time, heavy immigration started to occur from Germany. The town newspaper, the Barrhead News was printing in 1927 and soon was called the Barrhead Leader, the present day newspaper. In 1936, the curling rink was established plus William Johnson became the village constable. The movie theatre opened in 1939. In 1946, the village borrowed money to install water and sewer and that year on November 26 Barrhead became a town. Since then, the town has continued to grow and become continually more prosperous. 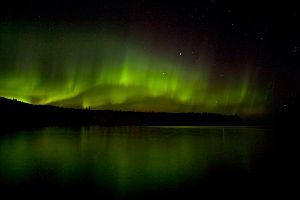 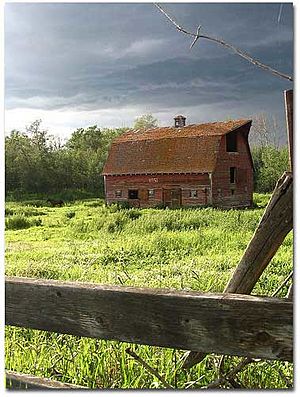 Example of the countryside around Barrhead

The area contains dense stands of spruce, birch, pine and poplar. The area also has some of the most fertile farmland in the province and is located between two major rivers, the Athabasca River and Pembina River. The Paddle River, a tributary of the Pembina River that flows directly through the town Barrhead. If you go south and east of town there are low flatlands and river-lands and to the west of town there is the areas main recreational area, Thunder Lake Provincial Park approximately 16 kilometres (9.9 mi) west of the town. The Thunder Lake is very popular for boating, fishing and camping and is home to many residents from other areas of the province during the summer months. The northern parts of the Barrhead region contain thick stands of spruce, pine and tamarack. Throughout the county of Barrhead there are also numerous lakes besides just Thunder Lake Provincial Park that are great for camping and fishing. There is also a local ski hill with good elevation on the Athabasca River valley.

The town has a humid continental climate (Köppen climate classification Dfb, USDA Plant Hardiness Zone 3a) with warm summers and cold winters. There are four distinct seasons. Temperatures reach upwards of 35 degrees Celsius during June, July, and August and for a few months a year drop as low as −50 degrees Celsius. Rainfall is moderate, with the majority falling during the summer months. The area is noticeably wetter than in surrounding regions, particularly to the south and east. Around a metre of snow falls on the region during winter. During the summer solstice, twilight extends throughout the night and during the winter, night comes quickly. However, the town gets to experience beautiful displays of the Aurora borealis and this helps with the dark.

Barrhead is twinned with:

All content from Kiddle encyclopedia articles (including the article images and facts) can be freely used under Attribution-ShareAlike license, unless stated otherwise. Cite this article:
Barrhead, Alberta Facts for Kids. Kiddle Encyclopedia.