Beaver River is a large river in east-central Alberta and central Saskatchewan, Canada. It flows east through Alberta and Saskatchewan and then turns sharply north to flow into Lac Île-à-la-Crosse on the Churchill River which flows into Hudson Bay.

The north-flowing part flows through thinly populated boreal forest. Saskatchewan Highway 155 follows its west bank. It receives from the east a river draining Cowan Lake (Saskatchewan) and Deleronde Lake, from the west the Waterhen River, from the east Doré River draining Doré Lake. The highway leaves the river at Beauval Forks and near Beauval, Saskatchewan it receives the outflow of Lac la Plonge from the east. It continues northward east of the south arm of the lake and enters Lac Île-à-la-Crosse across the lake from the village of Île-à-la-Crosse. 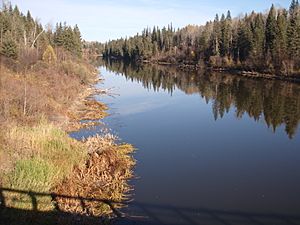 The river, or parts of it, is described as poor canoe country. Crews had to drag their canoes over the shallow parts and there was little game. The mouth of the Beaver River is on the main axis of the fur trade. The upper Beaver is about 80 kilometres (50 mi) north of the North Saskatchewan. From at least 1795 buffalo pemmican was brought north to feed the voyageurs on their way to the Athabasca Country. One route led south to the great bend of the Beaver, through Green Lake, Saskatchewan, and over an Indian track to Fort Carlton. In 1875–76 this was replaced by a cart road at about the time steamboats appeared on the Saskatchewan. Another route went further up the Beaver to Moose Lake (Alberta) and by some route to Fort George.

The first European to reach the Beaver may have Louis Primeau in 1767. About 1768 William Pink was on the river. He went northwest from the lower Saskatchewan followed the Beaver west and returned to the Saskatchewan near Edmonton. In 1776 Primeau working for Thomas Frobisher built a post on Lac Île-à-la-Crosse. In 1781 Montreal traders built Cold Lake House near Beaver Crossing, Alberta. In perhaps 1782 the Northwest Company built a post on Green Lake. In 1798 David Thompson used the Beaver to reach Lac La Biche. In 1799 the Hudson's Bay Company decided to push west up the Churchill from Frog Portage. In that year they built rival posts on Lac Île-à-la-Crosse and Green Lake. They also built a post above the great bend at Meadow Lake, Saskatchewan, that only lasted two years. There was a great deal of conflict between the two companies until the merger in 1821.

All content from Kiddle encyclopedia articles (including the article images and facts) can be freely used under Attribution-ShareAlike license, unless stated otherwise. Cite this article:
Beaver River (Canada) Facts for Kids. Kiddle Encyclopedia.