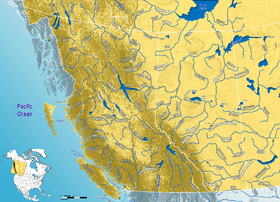 Cold Lake is a large lake in Central Alberta and Northern Saskatchewan, Canada. The lake straddles the Alberta/Saskatchewan border, and has a water area of 373 km2 (144 sq mi). It is also one of the deepest lakes in Alberta with a maximum depth of 99.1 m (325 ft). It has around 24 known species of fish in it and is a major ice fishing lake. It is also major stop for many migrating birds, and is home to one of the largest warbler populations in Alberta. A surface of 248 km2 (96 sq mi) lies in the province of Alberta. 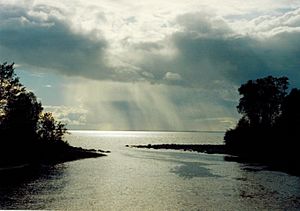 All content from Kiddle encyclopedia articles (including the article images and facts) can be freely used under Attribution-ShareAlike license, unless stated otherwise. Cite this article:
Cold Lake (Alberta) Facts for Kids. Kiddle Encyclopedia.