The ciscoes (or ciscos) are salmonid fish of the genus Coregonus that differ from other members of the genus in having upper and lower jaws of approximately equal length and high gill raker counts. These species have been the focus of much study recently, as researchers have sought to determine the relationships among species that appear to have evolved very recently. The term cisco is also specifically used of the North American species Coregonus artedi, also known as lake herring.

In previous taxonomic classifications, the ciscoes have been identified as a subgenus Leucichthys of the genus Coregonus. Based on molecular data this is not a natural classification however, as the ciscoes are polyphyletic, comprising two different lineages within the freshwater whitefishes.

Eight taxa of cisco have been recognized in the Laurentian Great Lakes and other interior lakes of the once-glaciated North America.

Usually, several taxa of ciscoes are found in a single lake. They exhibit different habitat distributions, feeding and breeding habits and morphological adaptations e.g. in their gill raker numbers. In the Great Lakes, at least five ciscoes coexist.

According to genetic analyses, these cisco types do not represent unique, separate evolutionary lineages, but similar cisco morphs have evolved and attained their specific characteristics largely independently in each lake. Therefore, it has been suggested that they should not be recognized formally as distinct taxa, but all considered members of a single species, Coregonus artedi (sensu lato). or Coregonus artedi complex. Nevertheless, for conservation and management purposes the sympatric morphs in each lake should be considered ESUs, evolutionarily significant units. This taxonomic view is not widely accepted however, which has complicated discussions of the conservation status of some species.

Ciscoes have been exploited in commercial fisheries, particularly in the Laurentian Great Lakes where the deepwater forms were the basis of the so-called chub fishery. The chub fishery had nothing to do with the various cyprinid fish species known as chubs but was exclusively based on the various species of ciscoes. The fishery continued as cisco stocks fell and non-native species such as sea lamprey, rainbow smelt and alewife spread through the system and increased in abundance. Alewife, in particular, have been implicated as a predator of cisco eggs and larvae, and as a competitor with ciscoes. The fishery shifted focus from species to species as cisco numbers declined and has been largely defunct for some years. 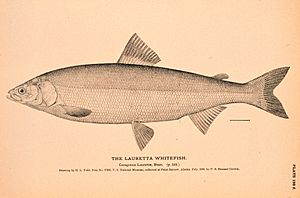 Three species of cisco inhabit waters of the northwestern North America. These have been found to represent distinct evolutionary lineages, by genetic data.

The ranges of the three cisco species above extend across Beringia to the Asian coasts. Of those the Arctic cisco and least cisco (=sardine cisco) are widespread through northern Siberia. In the inland waters of northern Europe, the European cisco or vendace (Coregonus albula) replaces the Siberian sardine cisco. Some of the cisco lineages are genetically very close, such as the European and sardine ciscoes. Within some species, geographically separated populations have been treated as distinct taxa, despite close genetic relationships, such as the vendace and the pollan (Arctic cisco) on the British Isles. The European cisco has also evolved into ecologically distinct sympatric populations or ecomorphs independently within several lakes (e.g. autumn and spring spawning populations, normal and dwarf morphs), which have been designated as distinct taxa, making the systematics complicated as with the North American Coregonus artedi complex.

All content from Kiddle encyclopedia articles (including the article images and facts) can be freely used under Attribution-ShareAlike license, unless stated otherwise. Cite this article:
Cisco (fish) Facts for Kids. Kiddle Encyclopedia.