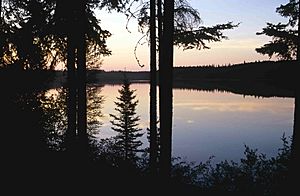 Wood Buffalo National Park is a national park and the largest one in Canada. The park is located in northeastern Alberta and southern Northwest Territories.

It was named as a UNESCO World Heritage Site in 1983 because of it's biological diversity of the Peace-Athabasca Delta, which is one of the world's largest freshwater deltas, as well as the population of wild bison.

All content from Kiddle encyclopedia articles (including the article images and facts) can be freely used under Attribution-ShareAlike license, unless stated otherwise. Cite this article:
Wood Buffalo National Park Facts for Kids. Kiddle Encyclopedia.