The ruffed grouse (Bonasa umbellus) is a medium-sized grouse occurring in forests from the Appalachian Mountains across Canada to Alaska. It is non-migratory. It is the only species in the genus Bonasa.

The ruffed grouse is sometimes incorrectly referred to as a "partridge", an unrelated phasianid, and occasionally confused with the grey partridge, a bird of open areas rather than woodlands.

The ruffed grouse is the state bird of Pennsylvania, United States. 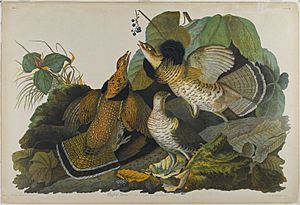 Bonasa umbellus was first described by Carl Linnaeus in his 1766 12th edition of Systema Naturae. He classified it as Tetrao umbellus, placing it in a subfamily with Eurasian grouse. The genus Bonasa was applied by British naturalist John Francis Stephens in 1819. Ruffed grouse is the preferred common name because it applies only to this species. Misleading vernacular names abound, however, and it is often called partridge (sometimes rendered pa'tridge, or shortened to pat), pheasant, or prairie chicken, all of which are properly applied to other birds. Other nicknames for ruffed grouse include drummer or thunder-chicken.

There are 14 recognized subspecies of ruffed grouse: 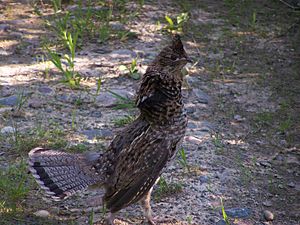 These chunky, medium-sized birds weigh from 450–750 g (0.99–1.65 lb), measure from 40 to 50 cm (16 to 20 in) in length and span 50–64 cm (20–25 in) across their short, strong wings. Ruffed grouse have two distinct morphs: grey and brown. In the grey morph, the head, neck and back are grey-brown; the breast is light with barring. There is much white on the underside and flanks, and overall the birds have a variegated appearance; the throat is often distinctly lighter. The tail is essentially the same brownish grey, with regular barring and a broad black band near the end ("subterminal"). Brown-morph birds have tails of the same color and pattern, but the rest of the plumage is much more brown, giving the appearance of a more uniform bird with less light plumage below and a conspicuously grey tail. There are all sorts of intergrades between the most typical morphs; warmer and more humid conditions favor browner birds in general. 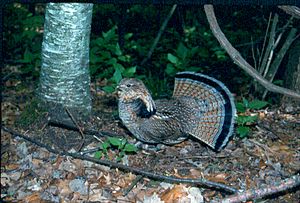 The ruffs are on the sides of the neck in both sexes. They also have a crest on top of their head, which sometimes lies flat. Both genders are similarly marked and sized, making them difficult to tell apart, even in hand. The female often has a broken subterminal tail band, while males tend to have unbroken tail bands, though the opposite of either can occur. Females may also do a display similar to the male. Another fairly accurate sign is that rump feathers with a single white dot indicate a female; rump feathers with more than one white dot indicate a male. 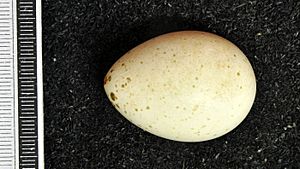 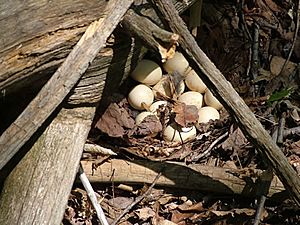 Like most grouse, they spend most of their time on the ground; mixed woodland rich in aspen seems to be particularly well-liked. These birds forage on the ground or in trees. They are omnivores, eating buds, leaves, berries, seeds, and insects. According to nature writer Don L. Johnson:

More than any other characteristic, it is the ruffed grouse's ability to thrive on a wide range of foods that has allowed it to adapt to such a wide and varied range of habitat on this continent. A complete menu of grouse fare might itself fill a book. One grouse crop yielded a live salamander in a salad of watercress. Another contained a small snake. 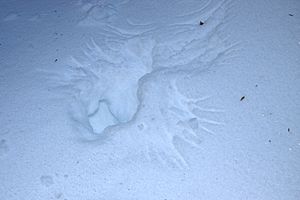 Hunting of the ruffed grouse is common in the northern and far western United States as well as Canada, Often done with shotguns. Dogs may also be used. Hunting of the ruffed grouse can be challenging. This is because the grouse spends most of its time in thick brush, aspen stands, and second growth pines. It is also very hard to detect a foraging grouse bobbing about in the thicket due to their camouflage. With adequate snow cover they will burrow under the snow. Like other forest creatures, the ruffed grouse will maintain trails through the underbrush and pines. These can often be found by looking for the feathers of the bird on the ground and on twigs at the edges of its trail. Hunting of the ruffed grouse requires a good ear and lots of stamina as you will be constantly walking and listening for them in the leaves.

Ruffed grouse frequently seek gravel and clover along road beds during early morning and late afternoon. These are good areas to walk during this time to flush birds. Also, grouse use sandy road beds to dust their feathers to rid themselves of skin pests. Dusting sites are visible as areas of disturbed soils with some signs of feathers. Birds will return to these spots during the late afternoon to bathe in dust and to socialize and mate.

Minnesota is the top ruffed grouse–producing state in the U.S.

The ruffed grouse differs from other grouse species in its courtship display. Unlike other grouse species, the ruffed grouse relies entirely on a non-vocal acoustic display, known as drumming. The drumming itself is a rapid, wing-beating display that creates a low frequency sound, starting slow and speeding up (thump ... thump ... thump..thump-thump-thump-thump). Even in thick woods this can be heard for a .25 miles (0.40 km) or more.

The ruffed grouse spends most of its time quietly on the ground, and when surprised, may explode into flight, beating their wings very loudly. In the winter, they will burrow into the snow for warmth, and may suddenly burst out of the snow when approached too closely.

The ruffed grouse population has a cycle, and follows the cycle no matter how much or how little hunting there is. The cycle has puzzled scientists for years, and is simply referred to as the "grouse cycle". In spite of this historical cycle, populations have been declining in Pennsylvania and management plans adopted. Habitat loss has been a concern for the species, but the introduction of the West Nile virus has been seen to be further increasing mortality.

All content from Kiddle encyclopedia articles (including the article images and facts) can be freely used under Attribution-ShareAlike license, unless stated otherwise. Cite this article:
Ruffed grouse Facts for Kids. Kiddle Encyclopedia.