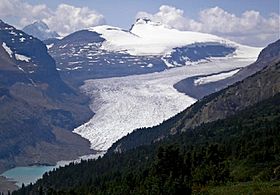 Castleguard Mountain, also known as Mount Castleguard, is an isolated mountain located near the southern edge of the Columbia Icefield at the northern edge of Banff National Park in Alberta, Canada. In 1918, Irish land surveyor Arthur Oliver Wheeler named the mountain because of its castle-like appearance, which seemed to stand guard over the southern portion of the Columbia Icefield. Castleguard was first ascended in 1919 by the Interprovincial Boundary Commission, which determined the exact location of the boundary between British Columbia and Alberta along the continental divide.

Author Lewis Freeman, in his 1925 book Roof of the Rockies, described the view from the summit:

Possibly lacking the sheer breath-taking wonder of the first sight of Kinchinjunga's snows from Darjeeling, the view from the summit of Castleguard is still one of the great mountain panoramas of the world. Set on the southern rim of the Columbia Icefields, with no other peak encroaching on its domain for many miles, there are no masking barriers close at hand to cut off the view in any direction. Not only are almost all the great peaks of the Canadian Rockies system notched into the splendid panorama, but also many of those of the Selkirk and Gold Ranges, far beyond the purple-shadowed depths that mark the great gorge of the Columbia River.

Based on the Köppen climate classification, Castleguard is located in a subarctic climate with cold, snowy winters, and mild summers. Temperatures can drop below −20 °C with wind chill factors below −30 °C.

All content from Kiddle encyclopedia articles (including the article images and facts) can be freely used under Attribution-ShareAlike license, unless stated otherwise. Cite this article:
Castleguard Mountain Facts for Kids. Kiddle Encyclopedia.