Lake Louise is a hamlet in Alberta, Canada within Improvement District No. 9 Banff (Banff National Park). 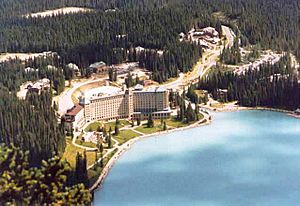 The hamlet is named for the nearby Lake Louise, which in turn was named after the Princess Louise Caroline Alberta (1848–1939), the fourth daughter of Queen Victoria, and the wife of John Campbell, the 9th Duke of Argyll, who was the Governor General of Canada from 1878 to 1883.

The hamlet was originally called Laggan, and was a station along the Canadian Pacific Railway route. It was built in 1890. The rail station building was preserved and moved into Heritage Park in Calgary. 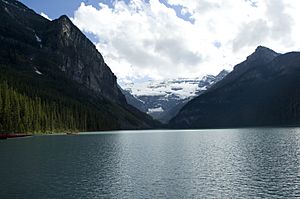 Picture of Lake Louise on a partly cloudy day in July, 2010.

As of 2001, Lake Louise had a total population of 1,041 living in 273 dwellings. Statistics Canada did not publish a population for Lake Louise from the 2006 census under its urban area or designated place programs. However, its 2006 population is approximately 777 based on data aggregated from the dissemination block level.

Lake Louise experiences a subarctic climate (Köppen climate classification Dfc). Annual snowfall averages 3.3m and winter temperatures below −50 °C have been recorded. Summers consist of frosty mornings and crisp, cool days. Snow can occur in any month of the year.

All content from Kiddle encyclopedia articles (including the article images and facts) can be freely used under Attribution-ShareAlike license, unless stated otherwise. Cite this article:
Lake Louise, Alberta Facts for Kids. Kiddle Encyclopedia.