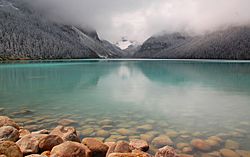 Lake Louise, also called Lake of the Little Fishes by the Stoney Nakota First Nations people, is a glacial lake within Banff National Park in Alberta, Canada. The village of Lake Louise is on the Trans-Canada Highway (Highway 1), which is 57 knots (106 km/h; 66 mph) west of Banff, Alberta. The emerald color of the water comes from rock flour carried into the lake by melt-water from the glaciers that overlook the lake. The lake has a surface of 0.8 km2 (0.31 sq mi) and is drained through the 3 km long Louise Creek into the Bow River. Moraine Lake and Lake Agnes are also accessible from Lake Louise.

Lake Louise was originally named "Emerald Lake". In 1884 the name was changed, naming it after the daughter of Queen Victoria, Princess Louise Caroline Alberta.

All content from Kiddle encyclopedia articles (including the article images and facts) can be freely used under Attribution-ShareAlike license, unless stated otherwise. Cite this article:
Lake Louise (Alberta) Facts for Kids. Kiddle Encyclopedia.