Moraine Lake is a glacially-fed lake in Banff National Park, 14 kilometres (8.7 mi) outside the village of Lake Louise, Alberta, Canada. It is situated in the Valley of the Ten Peaks, at an elevation of approximately 1,884 metres (6,181 ft). The lake has a surface area of 50 hectares (120 acres).

The lake, being glacially fed, does not reach its crest until middle to late June. When it is full, it reflects a distinctive shade of azure blue. The unique colour is due to the refraction of light off the rock flour deposited in the lake on a continual basis by surrounding glaciers.

The area around the lake has several walking/hiking trails that are, from time to time, restricted. The trail most commonly taken by tourists is The Rockpile Trail, which is along the actual moraine. The trail is approximately 300 metres (980 ft) long, with an elevation change of 24 metres (79 ft). The view of the lake from the top of the rockpile is one of the most photographed locations in all of Canada. That view of the mountains behind the lake in Valley of the Ten Peaks is known as the "Twenty Dollar View", as Moraine Lake was featured on the reverse side of the 1969 and 1979 issues of the Canadian twenty dollar bill. The area is plagued by traffic jams and parking chaos due to out-of-control tourism.

Along the same trail-head, the Consolation Lakes trail starts, which is approximately 3 kilometres (1.9 mi) long, with an elevation change of 90 metres (300 ft). Upon reaching Consolation Lakes hikers may continue along to the upper lake, which is not visible from the end of the lower lake. There is, however, no clearly marked trail, and can often be a scramble over large rocky areas. 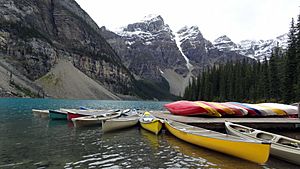 Near the canoe docks of Moraine Lake Lodge there is another trail-head. This trail-head is the start of two trails, one of which branches out into four different trails - so there are in total, five trails starting at that trail-head (Moraine Lake Lake shore Trail, Eiffel Lake, Wenkchemna Pass, Larch Valley, and Sentinel Pass). The Lake Louise & Yoho Map provides information on these trails.

The Neil Colgan Hut can be reached in 8 to 12 hours climbing the Perren Route from Moraine Lake.

The image of Moraine Lake is world-famous and appears in many places, including:

All content from Kiddle encyclopedia articles (including the article images and facts) can be freely used under Attribution-ShareAlike license, unless stated otherwise. Cite this article:
Moraine Lake Facts for Kids. Kiddle Encyclopedia.