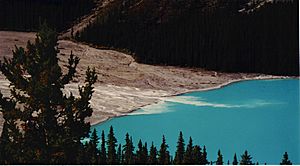 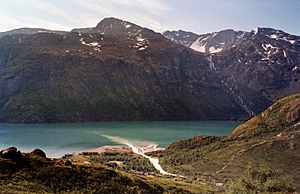 The river Muru flowing into Gjende lake in Norway 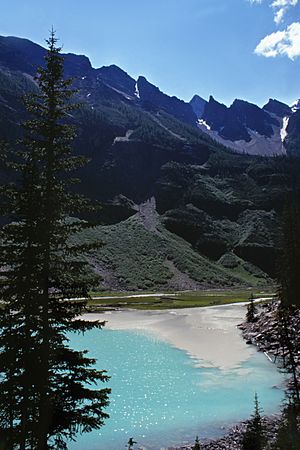 Rock flour, or glacial flour, consists of clay-sized particles of rock, generated by glacial erosion or by artificial grinding to a similar size. Because the material is very small, it is suspended in river water making the water appear cloudy. If the river flows into a glacial lake, the lake may appear turquoise in color as a result. Examples of this are Lake Louise, Canada and Gjende lake in Norway.

Some agronomists believe that rock flour has a powerful effect in restoring trace minerals to soil. An early experimeter was the German miller Julius Hensel, author of Bread from Stones, who reported successful results with steinmehl (stonemeal) in the 1890s. His ideas were not taken up through technical limitations and, according to proponents of his method, opposition from the champions of conventional fertilisers.

All content from Kiddle encyclopedia articles (including the article images and facts) can be freely used under Attribution-ShareAlike license, unless stated otherwise. Cite this article:
Rock flour Facts for Kids. Kiddle Encyclopedia.