Heritage Park Historical Village is a historical park in Calgary, Alberta, Canada, on 127 acres (51 ha) of parkland on the banks of the Glenmore Reservoir, along the city's southwestern edge. As Canada's second largest living history museum, it is one of the city's most visited tourist attractions. Exhibits span western Canadian history from the 1860s to the 1950s. Many of the buildings are historical and were transported to the park to be placed on display. Others are re-creations of actual buildings. Most of the structures are furnished and decorated with genuine artifacts. Staff dress in historic costume, and antique automobiles and horse-drawn vehicles service the site. Calgary Transit provides regular shuttle service from Heritage C-Train station. The park opened on July 1, 1964.

The Park has two operating seasons: the Historical Village is open from May to October; Gasoline Alley Museum is open year-round. 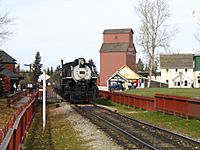 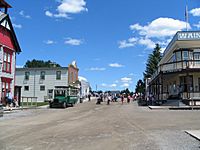 Heritage Park Historical Village has over 100 exhibits including:

In March 2009, Heritage Park opened a major new expansion, the Heritage Town Square. The addition features several new buildings depicting a larger 1930s and 1940s western Canadian town. Heritage Town Square is open year-round, unlike the rest of the park, which is seasonal.

Some of the new attractions include:

All content from Kiddle encyclopedia articles (including the article images and facts) can be freely used under Attribution-ShareAlike license, unless stated otherwise. Cite this article:
Heritage Park Historical Village Facts for Kids. Kiddle Encyclopedia.