Framingham is a town in Middlesex County, Massachusetts, United States. The population was 68,318 as of the United States 2010 Census, making it the 14th most populous municipality in Massachusetts. Founded in 1700, Framingham was placed at # 36 on 'Best Places to Live in US' by CNN Money magazine in 2012.

Framingham, sited on the ancient trail known as the Old Connecticut Path, was first settled when John Stone settled on the west bank of the Sudbury River in 1647. In 1660, Thomas Danforth, an official of the Bay Colony, formerly of Framlingham, Suffolk, received a grant of land at "Danforth's Farms" and began to accumulate over 15,000 acres (100 km2). He strenuously resisted petitions for incorporation of the town, which was officially incorporated in 1700, following his death the previous year. Why the "L" was dropped from the new town's name is not known. The first church was organized in 1701, the first teacher was hired in 1706, and the first permanent schoolhouse in 1716.

On February 22, 1775, the British general Thomas Gage sent two officers and an enlisted man out of Boston to survey the route to Worcester, Massachusetts. In Framingham those spies stopped at Buckminster's Tavern. They watched the town militia muster outside the building, impressed with the men's numbers but not their discipline. Though "the whole company" came into the tavern after their drill, the officers managed to remain undetected and continued on their mission the next day. Gage did not order a march along that route, instead ordering troops to Concord, Massachusetts, on April 18–19. Framingham sent two militia companies totaling about 130 men into the Battles of Lexington and Concord that followed; one of those men was wounded.

In the years prior to the American Civil War, Framingham was an annual gathering-spot for members of the abolitionist movement. Each Independence Day from 1854 to 1865, the Massachusetts Anti-Slavery Society held a rally in a picnic area called Harmony Grove near what is now downtown Framingham. At the 1854 rally, William Lloyd Garrison burned copies of the Fugitive Slave Law of 1850, judicial decisions enforcing it, and the United States Constitution. Other prominent abolitionists present that day included William Cooper Nell, Sojourner Truth, Wendell Phillips, Lucy Stone, and Henry David Thoreau.

During the post–World War II baby boom, Framingham, like many other suburban areas, experienced a large increase in population and housing. Much of the housing constructed during that time consisted of split-level and ranch-style houses.

Framingham is known for the Framingham Heart Study, as well as for the Dennison Manufacturing Company, which was founded in 1844 as a jewelry and watch box manufacturing company by Aaron Lufkin Dennison, who became the pioneer of the American System of Watch Manufacturing at the nearby Waltham Watch Company. His brother Eliphalet Whorf Dennison developed the company into a sizable industrial complex which merged in 1990 into Avery Dennison, with headquarters in Pasadena, California, and active corporate offices in the town.

In 2000, Framingham celebrated its Tercentennial.

Framingham is located in eastern Massachusetts, 20 miles (32 km) west of Boston, midway between Boston and Worcester. It is bordered by Southborough and Marlborough on the west; Sherborn and Ashland on the south; Natick on the east; Wayland on the northeast; and Sudbury on the north.

Brazilian immigrants have a major presence in Framingham. Since the 1980s, a large segment of the Brazilian population has come from the single city of Governador Valadares.

Framingham is one of the few towns in Massachusetts that have met their legal requirement of 10% for Massachusetts Chapter 40B Affordable housing which mostly targets people with income levels in the 70% of median income. In addition to its 40B Affordable component, Framingham has a large percentage of rental units which target people in the 30% of median income bracket. Framingham has a much larger percentage of rental households than any of the surrounding towns. Statewide, the median income of rental households is 47% of the median for homeowners, and in Middlesex County it is slightly more than 50%. In Framingham, the median renter income of $33,626 is 45% of the median homeowner income of $75,040.

Housing in South Framingham is mainly single-family houses on lots of less than 0.5 acres (0 ha), multi-family homes or apartments. Additionally much of the town's affordable housing is located south of Route 9. However, there a large number of large, single-family homes around Salem End Road on the West Side of South Framingham. This region is often overlooked as being in South Framingham because the area is physically separated from most of the South Side due to a series of reservoirs and the Sudbury River. Also, there are many large Victorian houses located along the shores of Learned and Gleason Ponds, and along Concord St. and Union Ave. near Downtown Framingham. Additionally, the West Side of South Framingham along Route 9 has several large tracts of multi-story apartment buildings that comprise a major part of the town's apartment stock.

North Framingham was originally mostly farmland and gave way to large tracts of single-family housing on lots of over 0.5 acres (0 ha) after World War II. The village of Saxonville on the east side is an old mill area that consists of many Victorian homes, and is undergoing a large expansion of over six hundred new homes on a former gravel pit. The village of Nobscot on the western side has many homes that are valued above mean housing prices for the region. While there are several small apartment complexes on the North Side, most have been converted to condominia. In the 1950s and 1960s, the villages of Nobscot, Pinefield, and Saxonville all had a large number of slab and raised ranch-style houses constructed by the Campanelli Company. These homes are classic cookie-cutter style homes that feature the same general shape and floor plan; while there are six or seven styles of the houses, the large majority of which are referred to Campanelli "L" ranches because their floor plan resembles the letter "L". At the time of construction, these homes were considered by many to be the epitome of the American dream of homeownership; today they are viewed as more modest homes.

Today, most of Framingham has been developed with the exception of some parcels in the northwest quadrant. In this part of town, there are more people with wells and septic systems, combined with a large amount of ledge, which prevents most of the unbuilt land from being developed.

Framingham is located approximately halfway between Worcester, the commercial center of Central Massachusetts, and Boston, New England's leading port and metropolitan area. Rail and highway facilities connect these major centers and other communities in the Greater Boston Metropolitan Area.

Framingham is served by one Interstate and four state highways:

Framingham features dozens of athletic fields and civic facilities spread throughout the town in schools and public parks. Many of the recreational facilities were constructed by the Civilian Conservation Corps during the New Deal. 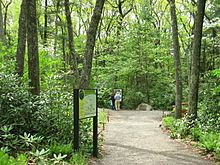 Garden in the Woods

All content from Kiddle encyclopedia articles (including the article images and facts) can be freely used under Attribution-ShareAlike license, unless stated otherwise. Cite this article:
Framingham, Massachusetts Facts for Kids. Kiddle Encyclopedia.