The name Natick comes from the language of the Massachusett Native American tribe and is commonly considered to mean place of hills. However, a more accurate translation may be place of (our) searching, named to celebrate John Eliot's successful search for a location for his Praying Indian settlement.

Natick was first settled in 1652 by John Eliot, a Puritan missionary born in Widford, Hertfordshire, England who received a commission and funds from England's Long Parliament to settle the Massachusett Indians on both sides of the Charles River, on land deeded from the settlement at Dedham. They were called Praying Indians – Natick was the first and for a long time served as the center of Eliot's network of praying towns. While the towns were largely self-governing under Indian leaders, the praying Indians were subject to rules governing conformity to English Puritan culture (in practice Natick, like the other praying towns, evidenced a combination of traditional and English culture and practices). Eliot and Praying Indian translators printed America's first written Bible in the Algonquian language.

The colonial government placed such settlements in a ring of villages around Boston as a defensive strategy. Natick was the first and best documented of such settlements. The land was granted by the General Court, part of the Dedham Grant.

A school was set up, a government established, and the Indians were encouraged to convert to Christianity. In November 1675, during King Philip's War, the Natick Indians were sent to Deer Island. Many died of disease and cold, and the Indians who survived found their homes destroyed. The Indian village did not fully recover, and the land held in common by the Indian community was slowly sold off to white settlers to cover debts, and, by 1785, most of the Natick Indians had drifted away.

In 1775, both English and Praying Indian citizens of Natick participated in the Battles of Lexington and Bunker Hill, as well as serving in the Continental Army. The names of the Praying Indian soldiers from Natick are memorialized on a stone marker, along with all of Natick's Revolutionary War veterans, on a stone marker on Pond St near downtown Natick.

The town was officially incorporated in 1781. Henry Wilson, a U.S. senator born in 1812 who became eighteenth Vice President of the United States (1873–1875), and who lived most of his life in Natick as a shoemaker and schoolteacher and was known as the "Natick Cobbler", is buried there. He is the namesake of one of Natick's middle schools.

Though Natick was primarily a farming town, the invention of the sewing machine in 1858 led to the growth of several shoe factories. The business flourished and peaked by 1880, when Natick, with twenty-three operating factories, was third in the nation in the quantity of shoes produced. The shoes made in Natick were primarily heavy work shoes with only one or two companies adding lighter dress shoes to their line. Natick was famous for its brogan (shoes), a heavy ankle-high boot worn by soldiers in the American Civil War.

The wound core for a more resilient baseball was developed by John W. Walcott and combined with the figure-eight stitching devised by Col. William A. Cutler. It was manufactured by the firm of H. Harwood & Sons in their factory built in 1858 – the first plant in the world for the manufacture of baseballs. In 1988 the H. Harwood & Sons factory was converted into baseball factory condominiums

In 1874, a great fire in downtown Natick demolished 18 business blocks, two shoe factories, the Town Hall, Natick's only fire engine house and the Congregational Church, as well as many private homes. Though no lives were lost, the loss of property was greater in proportion to the town's wealth than the Great Chicago Fire of 1871. In 1875, Natick's new Central Fire Station was completed on Summer Street and opened with grand ceremony on the same city block where the great fire was first discovered. The Central Fire Station is now the home of a private non-profit community performing arts center called The Center for Arts in Natick (TCAN).

Miles 8 through 12 of the Boston Marathon run through Natick on Patriots Day every year along Route 135/Central St., and thousands of residents and visitors line the road to watch.

Natick Center, which is also known as Downtown Natick, is located at the intersection of Central Street and Main Street and serves as the civic and cultural hub of the town.

South Natick, known for its scenic nature, is where the Native American settlers first arrived and began the town on the shores of the Charles River. Housing developers like Martin Cerel lived in South Natick, and thus refrained from building major tract neighborhoods in this part of town.

Most South Natick residents consider themselves to have a strong, separate cultural identity from the rest of Natick. It is the only community in Natick that can be separately addressed officially via the US Postal Office, and street signage such as a sign located along Route 16 coming from Wellesley communicates arrival in "So. Natick."

East Natick is a community of Natick that is located along Oak Street and at the intersection of Oak Street and Worcester Street. Notable landmarks include Jennings Pond, the Industrial Park on Oak St North, and the Lilja School. A sports and tennis club is located in East Natick off Oak St. in a part of the Industrial Park. The stretch of Route 9 in East Natick as one heads into Wellesley, contains a multitude of ever-changing retail businesses.

West Natick is a large section of Natick that borders the town of Framingham. The Natick Mall, as well as the strip mall called Sherwood Plaza with its office Industrial Park behind, are considered to be the commercial hub of West Natick. In addition to its retail development, post World War II housing developments like Westfield, Pelham, and Sherwood as well as the National Guard depot and a golf course on Speen St brought many people to this part of town.

There are many businesses in West Natick along West Central Street as well as another MBTA Commuter Rail station in addition to the one downtown. The area in West Natick, along Route 135 is the most densely populated section of town, with its thousands of condominiums and apartments clustered across the street from the train station.

Natick is a small town, and thus, the various sections of tract development homes are considered neighborhoods. These were houses built by several contractors in the late 1940s until the late 1950s. Listed here, are a few of these sections.

One of the earliest post World War II developments in West Natick, the homes are colonial in style, with street names reminiscent of the Robin Hood legend. The homes were built in 1948 and the neighborhood remains popular due to the fact that there's no through traffic, and most of the houses have been enlarged with additions.

Walnut Hill is a neighborhood located north of downtown. It is known for the private boarding school, Walnut Hill School as well as many Victorian era houses lining Walnut and Bacon Streets.

The Wethersfield area of Natick is a residential neighborhood North of Route 9. It is a typical 1950s development of Campanelli ranch houses, and remains popular with first time home-buyers, due to the relatively inexpensive nature of slab style houses. This area includes Drury lane and all connecting roads within the boundaries of route 9, Pine st. and Route 27.

South of Rte 9, this section began as a summer vacation area, with tiny cottages surrounding Jennings Pond. Over the years, some houses were enlarged, but the area remains quaint, and quiet with no thru-traffic. On the westerly side of South Oak, is a neighborhood of Cape style houses with streets named after World War II Generals. North of Route 9, other developments of small Cape-style homes were built in the early and mid-1950s and these houses remain popular with first-time home buyers due to the affordability of the houses. There are two Industrial Parks along north Oak St which contain office buildings on one side of the road, and larger warehouses on the eastern side.

Just south of the Natick Common, Cottage Street begins what is commonly called Little South, named so because of its proximity to South Natick. Little South nomenclature extends to the east portions of Everett Street, down to Eliot St. Homes along Cottage St. were primarily built in the early 1950s and are mostly modest, and well maintained. The best known landmarks in Little South are a WWII monument dedicated to the fallen soldiers from Natick, and The Tobin School, a private daycare and elementary school that has two large, attractive buildings off of Cottage St. Everett St. has larger farm homes situated on generous lots. Eliot St., which runs parallel to the Charles River, boasts some of the oldest and nicest homes in Natick. Just before South Natick begins, there is a beautiful Virgin Mary statue on a large rock on the south side of the Charles River, enveloped by graceful pine trees.

There were 13,080 households out of which 30.3% had children under the age of 18 living with them, 54.5% were married couples living together, 8.2% had a female householder with no husband present, and 34.8% were non-families. 28.3% of all households were made up of individuals and 9.8% had someone living alone who was 65 years of age or older. The average household size was 2.42 and the average family size was 3.02.

Natick is surrounded, on three sides, by five of the ten most affluent towns in Massachusetts with Wayland to the north, Weston to the northeast, Wellesley to the east, Dover to the southeast, and Sherborn to the southwest. 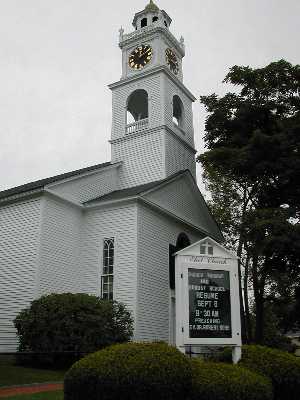 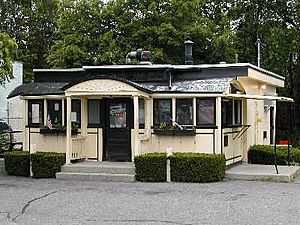 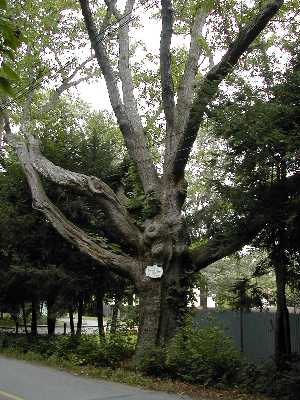 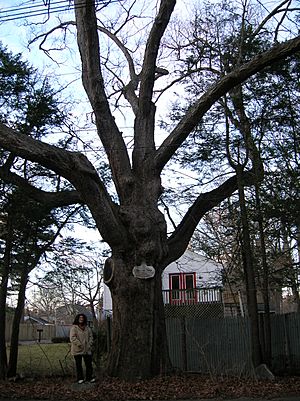 Natick appears on the Family Guy episode "Da Boom" when the family sets out to the town after Peter reveals that there is a Twinkie factory there (Natick did contain a Hostess factory until 2007). He eventually starts a town on the ruins of the community, naming it New Quahog.

To solvers of crossword puzzles such as those of the New York Times and Los Angeles Times, natick refers to any square a solver cannot fill in correctly without guessing because the solver does not know either clue that passes through it. Such clues are generally proper nouns.

Natick appears in the 2015 video game Fallout 4, which is set in the greater Boston area (referred to in the game as The Commonwealth).

All content from Kiddle encyclopedia articles (including the article images and facts) can be freely used under Attribution-ShareAlike license, unless stated otherwise. Cite this article:
Natick, Massachusetts Facts for Kids. Kiddle Encyclopedia.