The Natick Mall (previously named the Natick Collection) is a shopping mall in Natick, Massachusetts. The original facility was the first enclosed shopping mall in Greater Boston upon opening in 1966; it was demolished and replaced by a larger building in 1994 and expanded in 2007. The mall, with the adjacent Shopper's World power center in Framingham, are major components of the Golden Triangle shopping district in the center of MetroWest, situated between Route 9 and Route 30. With 1,860,000 square feet (173,000 m2) of gross leasable area, the Natick Mall is the largest in New England by number of tenants, with 214. It is currently owned by Brookfield Property Partners and managed by Brookfield Properties.

The original Natick Mall was developed by businessmen William Lane, Stephen Mugar and John Brennan. Construction began in 1965, connecting two stand-alone locations of Sears and Filene's (both of which had opened in March and August 1965, respectively), with a 600,000 square-foot, single-level shopping venue with 30 in-line stores. The project would become one of the first enclosed malls in Greater Boston, and among the first built east of the Mississippi River. It was dedicated on April 27, 1966 with two smaller anchors on the north end of the mall, Woolworth's, Pray's Furniture, and a large fountain/entertainment area in front of Sears. Other charter tenants included Thom McAn, Baker Shoes, Ann Taylor, Parklane Hosiery, and a Hot Shoppes Cafeteria (later a York Steak House). Pray's Furniture was eventually replaced with a Boston Baby store, but after the closure of Boston Baby in the early 1980s, the vacant space was redeveloped into an additional retail wing and a four-bay food court.

By 1985, the mall had been acquired from the original owners by S.R. Weiner & Associates and William Finard, and, aside from the conversion of the former Boston Baby wing, the overall facility and retail mix had been virtually unchanged since opening in 1966. Weiner and Finard proposed an expansion of the mall, which would include the addition of a Lord & Taylor anchor as well as a second level of retail. However, it was found that not enough capital could be raised, and, coupled with lawsuits with Shopper's World owner Melvin Simon (who had made a controversial redevelopment proposal of that mall), the project was suspended indefinitely. However, Filene's was able to proceed with a renovation of its store in 1990 as part of the former expansion plans. This part was completed in 1991. 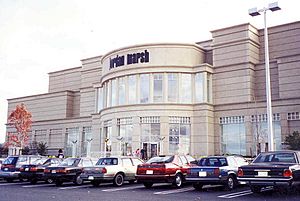 By the early 1990s, the outdated mall had caused many shoppers to go to other larger, more modern area malls to fulfill their needs. In 1992, the Homart Development Company purchased the Natick Mall and the adjacent Shopper's World in Framingham for redevelopment. Initial plans called for the Natick Mall to become a power center and Shopper's World an enclosed shopping mall; however, Filene's was unwilling to spend more capital on a new building at Shopper's World after remodeling their store in the mall, thus the plans were switched onto the opposite properties.

The original mall, except Filene's, was demolished in June 1993; its two-floor replacement, originally slated to open in August 1994 opened on October 12, 1994. It included previous anchor stores Filene's, Jordan Marsh, and a rebuilt Sears in addition to new tenant Lord & Taylor. Jordan Marsh was purchased by Federated Department Stores in 1994, and the nameplate was replaced by Macy's chain-wide in 1996.

Macy's relocated from the Jordan Marsh space to the Filene's space in 2006 when Macy's merged with Filene's. J. C. Penney opened in the former Jordan Marsh/Macy's space on March 9, 2007.

In late 2006, the mall began a renovation and expansion project. Its image was re-branded, first by attempting to change its name to simply Natick. After resistance from the town, the mall was instead renamed the Natick Collection. The first phase saw the renovation of the existing facility and the addition of a new wing on the property's north-east end, on the site of the former Wonder Bread/Hostess baking factory. The expansion added two new anchors, Nordstrom and Neiman Marcus, and nearly 100 new stores to the mall. This phase was opened to the public on September 7, 2007, though some stores planned to open through the winter and following spring. Construction of a Crate & Barrel, a relocated California Pizza Kitchen, and an American Girl Boutique and Bistro began in April 2008, with an original completion time frame of early spring 2009. The southwest mall entrance was moved approximately 100 ft (30 m), placing it between Crate & Barrel and the California Pizza Kitchen, across from the northwest wing housing J. C. Penney. The new 30,000 sq ft (2,800 m2) Crate & Barrel facility replaced the original 10,000 sq ft (930 m2) store with a new one-level store (with two-story facade) that occupies parts of the original location. In October 2009, the second phase of the expansion, The Promenade at Natick Collection, opened on the south-western section of the mall along Route 9; a Cheesecake Factory opened shortly after. The third phase, the construction of the condominiums, which originally had a projected completion of summer 2008, finished construction during spring 2009. The final phase is the proposed addition of a ten to twelve story luxury hotel adjacent to the new wing and across from J. C. Penney. Initial site work has been completed in 2008. With the addition and the new eight-story parking facility, the Natick Collection became the twenty-third largest mall in the country, fourth largest on the east coast, and the largest in New England.

The Great Recession negatively effected mall expansion. By December 2008, condominium sales in Nouvelle at Natick were behind projections, with only 34 of the 215 units sold or under contract. Real estate agents in the Metrowest area have stated that the prices of the units, ranging from $379,900 to over $1 million, combined with the timing of the opening of the facility have harmed sales. Several real estate agencies have stated that the developer would have had to lower its prices for the units to attract consumers in tight economic times. Additionally, home sales in the Natick and Framingham area are traditionally oriented towards single family homes which are also working against the residences. On September 10, 2009, The Boston Globe reported that Nouvelle at Natick would auction off 42 of the 215 units, with bids starting as low as $160,000.

In July 2011, the Natick Collection reverted to its original name, the Natick Mall, citing local tradition.

In 2015, Sears Holdings spun off 235 of its properties, including the Sears at Natick Mall, into Seritage Growth Properties.

On June 12, 2015, J. C. Penney announced that it would be closing on August 28. On August 4, regional supermarket chain Wegmans announced that it would lease the space to be vacated by J. C. Penney. This was discussed by analysts as following suit with the "emerging trend" of nontraditional mall anchors in order to "[emphasize] experiences and fun over shopping" as the significance of department stores declines. Construction began in 2016 and the store was originally scheduled to open in spring 2017, although it ultimately opened on April 29, 2018. Of the three floors and 194,000 square feet (18,000 m2) within the anchor spot, two floors and 146,500 sq ft (13,610 m2) were utilized; it is the first Wegmans to have multiple levels, entrances within a shopping mall, and a full-service restaurant within.

In January 2018, it was announced that the two-floor Sears would downsize to the 88,000-square-foot (8,200 m2) first floor; full-service restaurant and video arcade Dave & Buster's confirmed that it would lease the 44,000-square-foot (4,100 m2) second floor that August. Dave & Buster's opened on June 24, 2019. On October 15, Sears announced that it would be closing the store entirely as one of 142 unprofitable stores affected by Sears Holdings' bankruptcy filing. The store closed permanently in January 2019.

E-commerce retailer Wayfair opened its first brick-and-mortar store, a pop-up for the holiday season, from November 10, 2018 through January 2, 2019.

On February 1, 2019, American Girl announced that it would be closing on March 20, 2019. On December 7, 2019, the Blue Dalia Restaurant and Tequila Bar inside Wegmans closed permanently.

Following a two-level, generally T-shaped floor plan, the Natick Mall spans 1,860,000 square feet (173,000 m2). With its late-2000s expansion, it makes use of natural lighting with the intention of providing an open atmosphere. Its curved ceiling was inspired by the origin of the name Natick, meaning "place of rolling hills" in the Massachusett language. Much of the mall's design incorporates the leaves of the birch tree. The expansion also provided an underground parking garage in addition to its three existing structures. The lower level incorporates porcelain tile flooring, while the upper level uses engineered hardwood flooring; the design utilizes glass fixtures throughout. The exterior of the Neiman Marcus location is covered by an 80-foot (24 m) curved stainless steel panels colored in various shades of brown; it is intended to resemble a woman's dress.

All content from Kiddle encyclopedia articles (including the article images and facts) can be freely used under Attribution-ShareAlike license, unless stated otherwise. Cite this article:
Natick Mall Facts for Kids. Kiddle Encyclopedia.