American Girl is an American line of 18-inch (46 cm) dolls released in 1986 by Pleasant Company. The dolls portray eight- to twelve-year-old girls of a variety of ethnicities, faiths, and social classes from different time periods throughout history. They are sold with accompanying books told from the viewpoint of the girls. Originally the stories focused on various periods of American history, but was expanded to include characters and stories from contemporary life. Aside from the original American Girl dolls, the buyer also has the option to purchase dolls that look like themselves. The options for the line of Truly Me dolls include eye color, face mold, skin color, hair texture, and hair length. A variety of related clothing and accessories is also available. A service for ordering a custom-made doll with features and clothing specified by the owner, dubbed Create Your Own, has also been introduced in 2017.

Pleasant Company was founded in 1986 by Pleasant Rowland, and its products were originally purchasable by mail order only. In 1998, Pleasant Company became a subsidiary of Mattel. The company has been awarded the Oppenheim Toy Portfolio Award eight times.

The Historical Characters line of 18-inch dolls, which were derived from the 18-inch dolls made by Götz in West Germany (known as Germany from October 1990) during the late 1980s to the 1990s, were initially the main focus of Pleasant Company, founded by Pleasant Rowland in 1986. This product line aims to teach aspects of American history through a six-book series from the perspective of a girl living in that time period. Pleasant Rowland came up with the idea after she returned from a trip to Colonial Williamsburg, where she noticed there was a significant void in the toy market for younger aged dolls and saw an opportunity to provide an alternative to baby and adult dolls. Although the books are written for girls who are at least eight years old, they endeavor to cover significant topics such as child labor, child abuse, poverty, racism, slavery, animal abuse and war in manners appropriate for the understanding and sensibilities of their young audience.

In 1994, Pleasant Company released a line of contemporary dolls called American Girl of Today. In 2006, the product line was renamed Just Like You; it was changed again in 2010 to My American Girl, and in 2015 to Truly Me. This line has included eighty-eight different dolls over the years. Each doll has a different combination of face mold, skin tone, eye color, and hair color, length, texture, and/or style. American Girl states that this variety allows customers to choose dolls that "represent the individuality and diversity of today's American girls." A wide variety of contemporary clothing, accessories, and furniture is also available, and there are regular releases and retirements to update this line. Each year, a Girl of the Year doll is released who has her own special talent; for example, Mia St. Clair, the Girl of the Year for 2008, was an ice skater, and Marisol Luna, the Girl of the Year for 2005, was a dancer.

Bitty Baby is a line of 15" baby dolls targeted to children aged three and older. They are cheaper than the 18" dolls, and currently retail at $60 each.

The Bitty Twins line debuted in 2003 to represent slightly older toddlers and/or preschoolers. The Bitty Twins were the same size as the Bitty Baby dolls. They were discontinued in June 2016.

Hopscotch Hill School was released by American Girl in 2003. The dolls were 16-inch (41 cm) tall, came with jointed limbs and painted eyes, and had a slimmer overall body shape. They, along with the stories which came with the dolls written by Valerie Tripp, were aimed at elementary-age girls from four to six years old, and were sold until 2006.

A reboot of the Historical Characters line dubbed as BeForever was launched in August 2014, complete with redesigned outfits, a two-volume compilation of previously-released books, and a "Journey Book" for each character, with players taking the role of a present-day girl who found her way to the past and met up with one of the Historical girls. The line also coincided with the relaunch of Samantha Parkington, whose collection was previously discontinued in 2008.

In June 2016, American Girl unveiled Wellie Wishers, a separate doll line similar to Hopscotch Hill School aimed for younger children and with a focus on the outdoors, positioning it between Bitty Baby and the BeForever/Girl of the Year/Truly Me dolls. As the name implies, dolls from the line wear Wellington (wellie) boots, and have a body design distinct from the classic, Götz-derived American Girl dolls. The line was released on June 23, 2016. The names of the Wellie Wishers are: Willa, Camille, Kendall, Emerson, and Ashlyn.

In February 2017, American Girl released a new line of 18" dolls called contemporary characters. The first doll in the line was Tenney Grant, an aspiring country singer and songwriter. Other dolls of the contemporary line include Logan, Tenney's bandmate and American Girl's first ever boy doll, and Z Yang, who is interested in photography and making stop motion videos. 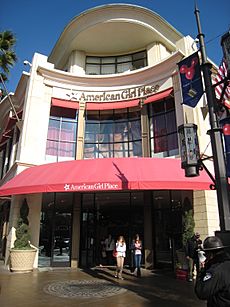 American Girl Place in The Grove at Farmers Market in Los Angeles, California

The American Girl store sells American Girl dolls, clothes, and accessories. The first store, the 35,000 square-foot American Girl Place, designed by Nancye Green of Donovan/Green, debuted in Chicago in 1998. It was followed by stores in New York City and Los Angeles.

In May 2014, Mattel American Girl opened new stores in Toronto, Ontario and Vancouver, British Columbia in Canada in partnership with Indigo Books and Music. The company has also expressed interest in other overseas ventures, as they are seeing orders from Europe and Latin America. In 2015, the company announced that they were expanding operations in Mexico with two stores at El Palacio de Hierro’s Perisur and Interlomas in Mexico City, and a third in Polanco.

The first temporary boutique opened in Honolulu, Hawaii at the Ala Moana Center, running from October 4, 2014, to April 2015.

The American Girl magazine was run by the American Girl company. It was started by the Pleasant Company in Middleton, Wisconsin in 1992, with the first issue dated January 1993. Aimed towards girls ages 8–14, the bimonthly magazine included articles, recipes, advice columns, fiction, arts and crafts, and activity ideas. American Girl announced in late 2018 that the January/February 2019 issue would be the magazine's last.

American Girl launched Innerstar University, an online virtual world featuring the My American Girl contemporary doll line, on July 13, 2010. Access to the online world is via a Campus Guide, bundled with purchase of a My American Girl doll, which contains an access code for the creation of a doll avatar that then navigates the various games, shops, and challenges of the virtual campus of Innerstar U. In 2015, when My American Girl dolls were changed to Truly Me dolls, this website was closed down. The launch was simultaneous with Shine on Now, a fund-raising effort Kids In Distressed Situations, National Association of Children's Hospitals and Related Institutions, National Wildlife Federation, and Save the Children charities. The company has also donated "almost $500,000" over several years to national non-profit homeless housing group HomeAid. These contributions are mainly through its Project Playhouse program.

All content from Kiddle encyclopedia articles (including the article images and facts) can be freely used under Attribution-ShareAlike license, unless stated otherwise. Cite this article:
American Girl Facts for Kids. Kiddle Encyclopedia.