Tysons Corner Center, located in the unincorporated area of Tysons in Fairfax County, Virginia, United States (between McLean and Vienna, Virginia), opened to the public in 1968, becoming one of the first fully enclosed, climate-controlled shopping malls in the Washington metropolitan area.

It is the largest shopping mall in the state and in the Baltimore-Washington area. Tysons Corner Center is located 12.5 miles (20.1 km) from the central business district of Washington D.C. and neighbors the Tysons Galleria mall across Chain Bridge Road.

Tysons Corner Center was one of the first super-regional malls in the country, drawing customers from a multi-state area. The mall's three department store anchors are Bloomingdale's, Macy's, and Nordstrom (a fourth anchor was vacated by Lord & Taylor in January 2020). A 2005 expansion off the former Woodie's/JCPenney structure is anchored by a 16-screen AMC multiplex movie theater, a Barnes & Noble Booksellers book store, and an Old Navy. Tysons Corner Center is the largest mall in the metropolitan area and the 10th largest in the United States. A second mall, called Tysons Galleria, operates across the street from Tysons Corner Center within the Tysons II office development (with many people referring to the mall itself as "Tysons II"); it opened in 1988. To distinguish, many call the original mall "Tysons I."

The mall was built as a follow-on partnership by Isadore Guldesky and Theodore Lerner's Wheaton Plaza which opened in 1960. On May 31, 1962 the $20 million project was awarded to Lerner-Gudelsky by a 4–2 vote against James Rouse's Rouse Company with a controversial vote by William H Moss, a County supervisor who also worked for Gudelsky's District Title Insurance Company. A lawsuit involving an exchange of a lease for Lansburgh's in exchange for favorable zoning for the location delayed the opening until 1969. The Mall originally had 5 courts which were the Umbrella Court in front of Lansburgh's, Fashion Court, Fountain Court in front of Hechts, Aviary Court and the Clock Court located near the Woodie's entrance. The fashion court stage and flight cage in the aviary court were replaced with fountains when the lower level was added, causing these areas to be mistakenly called "fountain courts" while the original fountains were removed from the Hecht's entrance. One of the few remaining pieces of the original infrastructure of the 1968 mall visible to patrons are the escalators between the second and third floor of Bloomingdale's, which are the original Lansburgh's escalators.

From its opening until the 1990s, the mall contained a wide and diverse retail mix. Discount chain Woolworth's operated a store in the mall until the entire chain went under in 1997. Hot Shoppes cafeteria also occupied space in the mall until 1998. These types of stores shared space with higher-end tenants such as Liz Claiborne and A/X Armani Exchange. In the 2000s, under the ownership of Wilmorite Properties, the mall re-tenanted and has served as the primary launchpad location for a number of successful retail chains. LL Bean opened its first full line department store outside of its Freeport, Maine headquarters in 2000. Apple opened the first of its retail stores at Tysons in 2001, it plans to relocate to Tysons Galleria in the future. Martin + Osa and Cusp by Neiman Marcus opened in 2006. MNG By Mango made their U.S. debut at Tysons in 2006 as well, but that store has since closed. In 2007, Canadian-based clothing retailer Garage opened its first U.S. store at Tysons. Many retailers have flagship stores at the mall, including Pottery Barn and Victoria's Secret.

Originally, the mall consisted of 1.2 million square feet (110,000 m2) on one level, three department stores (Hecht's, Lansburgh's, and Woodward & Lothrop), and 100 specialty stores, including Jelleff's. In 1988, the mall was expanded to add a second floor, at which time Lord & Taylor and Nordstrom opened; this was the first Nordstrom east of the Mississippi River. Today, the mall has 2.1 million square feet (195,000 m2) of retail space on three levels, 16 movie screens, and nearly 300 stores. As part of the upcoming "Tysons Future" renovation and expansion plans, a glass elevator has been added to the Fashion Court (where the Nordstrom wing meets the main mall hallway), which opened on November 28, 2008.

In 2013, Tysons Corner Center was assessed for $1 billion, making it by far the most valuable property in the metropolitan area.

In 2019, Lord & Taylor announced that its Tysons Corner Center location would close as part of a plan to close five stores nationwide. This location closed in January 2020. 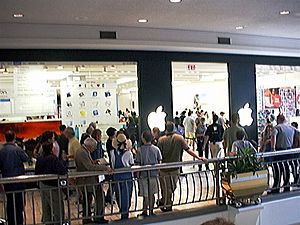 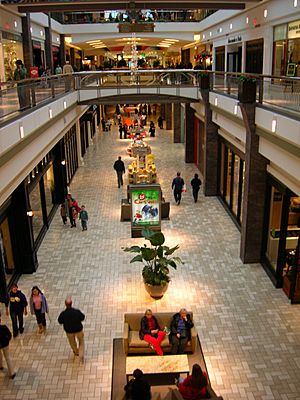 Inside Tysons Corner Center in the expansion wing in 2006.

The Washington Metro subway (Silver Line) has expanded westward to Tysons Corner, and eventually will be extended to Dulles Airport and beyond. The Tysons Corner station on the Silver Line is on the north side of the shopping center where Tysons Boulevard crosses State Route 123 (Chain Bridge Road). There are four stations in the Tysons Corner area. Utility relocation for the project began in 2008. The Silver Line opened July 26, 2014.

The Macerich Company, who acquired owner Wilmorite Properties in 2005, is developing Tysons Corner Center into a community location. There will be expansions for residential and commercial buildings, along with a hotel. There will also be slight expansions to the mall. The project will be completed in four stages and it is expected to be finished in 10 to 15 years, adding 3,500,000 sq ft (325,160 m2) of office, residential, and retail space.

All content from Kiddle encyclopedia articles (including the article images and facts) can be freely used under Attribution-ShareAlike license, unless stated otherwise. Cite this article:
Tysons Corner Center Facts for Kids. Kiddle Encyclopedia.