Vienna is a town in Fairfax County, Virginia, United States. As of the 2010 United States Census, it had a population of 15,687. Significantly more people live in ZIP codes with the Vienna postal addresses (22180, 22181, and 22182), bordered approximately by Interstate 66 on the south, Interstate 495 on the east, Route 7 to the north, and Hunter Mill Road to the west, than in the town itself. 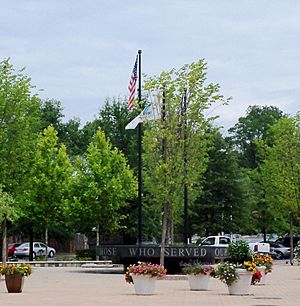 Non-native settlement in the region dates to ca. 1740. In 1754, prominent soldier and land owner Colonel Charles Broadwater settled within the town boundaries. Broadwater's son-in-law, John Hunter built the first recorded house there in 1767, naming it Ayr Hill (recalling his birthplace, Ayr, Scotland.) That name was subsequently applied to the tiny, developing community. The name of the town was changed in the 1850s, when a doctor named William Hendrick settled there on the condition that the town would rename itself after his hometown, Phelps, New York, then known as Vienna.

On June 17, 1861 a relatively minor but widely noted military engagement occurred there, the Battle of Vienna, one of the earliest armed clashes of the Civil War. A would-be Union occupation unit under Brig. Gen. Robert C. Schenck approached Vienna from the east by train but was ambushed and forced to retreat by a superior Confederate force led by Colonel Maxcy Gregg. Today, several historical markers in Vienna detail its Civil War history.

The First Baptist Church of Vienna was founded in 1867, and the original church structure was built using Union Army barracks lumber obtained through the Freedmen's Bureau. This church building was also the town's first black public school. The first white public school was built in 1872. A permanent black elementary school was built, which was later named for its long-time principal, Louise Archer. Fairfax County Schools were completely desegregated by the Fall of 1965.

Robert Hanssen was arrested in Vienna in 2001 for spying for the Russian intelligence service (and previously the KGB). His home was outside the town but had a Vienna mailing address. He used dead drops in nearby Foxstone Park to deliver U.S. government secrets to his handlers, and to collect cash or diamonds in exchange. Hanssen was sentenced that year to serve multiple life terms in prison. 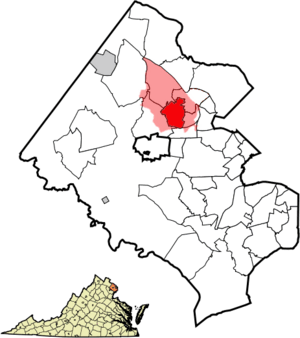 According to the United States Census Bureau, the town has a total area of 4.4 square miles (11.5 km²), all of it land. As a suburb of Washington, D.C., Vienna is a part of both the Washington Metropolitan Area and the larger Baltimore-Washington Metropolitan Area. It is bordered on all sides by other Washington suburbs, including: Wolf Trap to the north, Tysons Corner to the northeast, Dunn Loring to the east, Merrifield to the south, and Oakton to the west. These communities are unincorporated, and portions of them lie in ZIP codes with Vienna postal addresses despite lying outside the town's borders.

There were 5,528 households, out of which 39.6% had children under the age of 18 living with them, 63.4% were married couples living together, 3.7% had a male householder with no wife present, 9.1% had a female householder with no husband present, and 23.8% were non-families. 18.2% of all households were made up of individuals, and 8.1% had someone living alone who was 65 years of age or older. The average household size was 2.84, and the average family size was 3.19.

MAE-East is located within the Vienna postal area in Tysons Corner CDP. This served as one of two locations (in addition to MAE-West) where all Internet traffic was exchanged between one ISP and other private, government, and academic Internet networks and served as a magnet for telecom and other high-tech companies focused on the Internet. In 1995 America Online (AOL) was headquartered at 8619 Westwood Center Drive in Tysons Corner CDP in unincorporated Fairfax County, near Vienna.

According to the Town's 2020 Comprehensive Annual Financial Report, the top employers in the town are:

The town is served by Fairfax County Public Schools.

Vienna has one independent school, Green Hedges, accredited by the Virginia Association of Independent Schools. Green Hedges has students from ages 3– 5 (Montessori preschool and kindergarten program) through preparatory grades 1–8. Founded in 1942 by Frances and Kenton Kilmer, the School was relocated to the Windsor Heights area of Vienna in 1955.

Vienna also has one independent Catholic school, Oakcrest School, which was founded in 1976 and moved to its permanent campus in Vienna in 2017, and two Catholic elementary schools: St. Mark Catholic School and Our Lady of Good Counsel Catholic School.

The music program at James Madison High School includes a marching band, "The Pride of Vienna", and color guard, two symphonic bands, jazz band, orchestra, and chorus. The Crew team at James Madison has won many awards. The novice team has won states three years in a row In addition, the Women's Junior Eight of 2010 won second in the nation as well as Virginia States. Their Team sent all their boats but two, to the nationals in Saratoga. Their Varsity Baseball team has won 26 District titles, 6 Region titles, and 4 State titles (1968, 1971, 2002, 2015), led by Coach Mark "Pudge" Gjormand's 20-year run which produced 19 of the 36 titles (14 district, 3 region, and 2 state). A water tower stating "Home of the Warhawks" can be seen towering over the school. Also, more recently, the Madison Men's Lacrosse team, coached by coach of the year, Arron Solomon, won the District, Regional, and State championship in the spring of 2019. The 2019 lacrosse team was the first team at James Madison to win a state championship and did so without any players committed to a college team.

Thoreau Middle School shares a class with Joyce Kilmer Middle School (also located in Vienna) and Longfellow Middle School (located in Falls Church). Kilmer had accelerated programs for students that have passed certain aptitude tests, known as the Advanced Academic Program (AAP) program. This program has also been introduced into Luther Jackson Middle School. Kilmer also has a band and orchestra program, and recently started up a Science Olympiad and Chess Club program.

Close to Madison sit the seven elementary schools: Flint Hill Elementary (not to be confused with Flint Hill School, a private school in neighboring Oakton, Virginia), Louise Archer (which also has an AAP program), Marshall Road, Oakton Elementary (a feeder school into Oakton and Madison High Schools), Vienna Elementary, Wolftrap, and Cunningham Park. Each of these schools send graduates into Thoreau, Kilmer, Luther Jackson Middle School or Longfellow, and afterwards James Madison High School, Oakton High School (just outside Vienna on the border with Oakton, with a Vienna address), George C. Marshall High School (in the Falls Church area of Fairfax County), Falls Church High School (just outside Vienna in Merrifield) or McLean High School. Freedom Hill Elementary, which recently started an Advanced Academic program, sends graduates to Kilmer, and afterward to Thomas Jefferson High School for Science and Technology or Marshall High School. Residents of Vienna who live along the town's border with Great Falls, VA also send graduates into Langley High School via Cooper Middle School. Because of the large influx of new residents in the last decade, the classes of '09, '10, and '11 at these regional high schools are expected to be the largest over the next ten years. 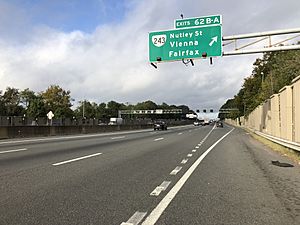 Many of these residents live outside the town but in the Vienna postal delivery area.

All content from Kiddle encyclopedia articles (including the article images and facts) can be freely used under Attribution-ShareAlike license, unless stated otherwise. Cite this article:
Vienna, Virginia Facts for Kids. Kiddle Encyclopedia.