Kids Encyclopedia Facts
This page is about the county. For the city with the same name, see Fairfax, Virginia. For other uses, see Fairfax (disambiguation).

Fairfax County, officially the County of Fairfax, is a county in the Commonwealth of Virginia.

As of the 2010 census, the population was 1,081,726, in 2015, it was estimated at 1,142,234, making it the Commonwealth's most populous jurisdiction, with 13.6% of Virginia's population. The county is also the most populous jurisdiction in the Washington-Arlington-Alexandria, DC-VA-MD-WV Metropolitan Statistical Area, with 19.8% of the MSA population, as well as the larger Washington-Baltimore-Arlington, DC-MD-VA-WV-PA Combined Statistical Area, with 13.1% of the CSA population. The county seat is the City of Fairfax, though because it is an independent city under Virginia law, the city of Fairfax is not part of Fairfax County. 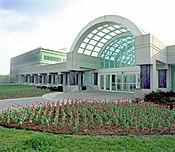 At the time of European encounter, the inhabitants of what would become Fairfax County were an Algonquian-speaking sub-group called the Taux, also known as the Doeg or Dogue. Their villages, as recorded by Captain John Smith in 1608, included Namassingakent and Nemaroughquand on the south bank of the Potomac River in what is now Fairfax County. Virginian colonists from the Northern Neck region drove the Doeg out of this area and into Maryland by 1670.

Fairfax County was formed in 1742 from the northern part of Prince William County. It was named for Thomas Fairfax, 6th Lord Fairfax of Cameron (1693–1781), proprietor of the Northern Neck. The Fairfax family name is derived from the Old English phrase for "blond hair" – Faeger-feahs.

Thomas Fairfax, 6th Lord Fairfax of Cameron, the only member of the British nobility ever to reside in the colonies, lived at Belvoir before he moved to the Shenandoah Valley. The Belvoir mansion and several of its outbuildings were destroyed by fire immediately after the Revolutionary War in 1783, and George Washington noted the plantation complex deteriorated into ruins.

Located near Washington, D.C., Fairfax County was an important region in the Civil War. The Battle of Chantilly or Ox Hill, during the same campaign as the second Battle of Bull Run, was fought within the county; Bull Run is the border between Fairfax and Prince William Counties. Other areas of activity included Minor's Hill, Munson's Hill, and Upton's Hill, on the county's eastern border, overlooking Washington, D.C.

The federal government's growth during and after World War II spurred rapid growth in the county and made the county increasingly suburban. Other large businesses continued to settle in Fairfax County and the opening of Tysons Corner Center spurred the rise of Tysons Corner. The technology boom and a steady government-driven economy also created rapid growth and an increasingly growing and diverse population. The economy has also made Fairfax County one of the nation's wealthiest counties.

Most of the county lies in the Piedmont region, with rolling hills and deep stream valleys such as Difficult Run and its tributaries. West of Route 28, the hills give way to a flat, gentle valley which stretches west to the Bull Run Mountains in Loudoun County. Elevations in the county range from near sea level along the tidal sections of the Potomac River in the southeast portion of the county to more than 500 feet (150 m) in the Tysons Corner area.

The Piedmont hills in the central county are made up of ancient metamorphic rocks such as schist, the roots of several ancestral ranges of the Appalachians. The western valley is floored with more recent shale and sandstone. This geology is similar to adjacent bands of rocks in Maryland and further south in Virginia along the eastern front of the Appalachians.

An area of 11 square miles (30 km2) of the county is known to be underlain with natural asbestos. Much of the asbestos is known to emanate from fibrous tremolite or actinolite. The threat was discovered in 1987, prompting the county to establish laws to monitor air quality at construction sites, control soil taken from affected areas, and require freshly developed sites to lay 6 inches (150 mm) of clean, stable material over the ground.

For instance, during the construction of Centreville High School a large amount of asbestos-laden soil was removed and then trucked to Vienna for the construction of the I-66/Nutley Street interchange. Fill dirt then had to be trucked in to make the site level. Marine clays can be found in widespread areas of the county east of Interstate 95, mostly in the Lee and Mount Vernon districts. These clays contribute to soil instability, leading to significant construction challenges for builders.

Fairfax County males have the highest life expectancy in the nation at 81.1 years, while females had the eighth-highest at 83.8 years.

Annual festivals include the "Celebrate Fairfax!" festival held in June at the Fairfax County Government Center in Fairfax City, the Northern Virginia Fine Arts Festival held in May at the Reston Town Center in Reston, and the International Children's Festival held in September at the Wolf Trap National Park for the Performing Arts, which features a performing arts center outside the town of Vienna.

The EagleBank Arena (originally the Patriot Center), on the Fairfax campus of George Mason University just outside the City of Fairfax, hosts concerts and shows. The nearby Center for the Arts at George Mason is a major year-round arts venue, and the Workhouse Arts Center in Lorton, Virginia includes studios for artists, event facilities for performing groups, and gallery exhibitions. Smaller local art venues include:

The county is in the Washington, D.C. metro area, the nation's third most congested area.

Northern Virginia, including Fairfax County, is the third worst congested traffic area in the nation, in terms of percentage of congested roadways and time spent in traffic. Of the lane miles in the region, 44 percent are rated "F" or worst for congestion. Northern Virginia residents spend an average of 46 hours a year stuck in traffic. 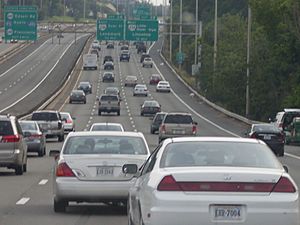 I-395 South in Northern Virginia

Fairfax County has multiple public transportation services, including the Washington Metro's Orange, Blue, Yellow, and Silver lines. The Silver line, which runs through the Tysons Corner and Reston areas of the county, opened in 2014 as the first new Washington Metro line since the Green Line opened in 1991.

In addition, the VRE (Virginia Railway Express) provides commuter rail service to Union Station in Washington, D.C. with stations in Fairfax County. The VRE's Fairfax County stations are Lorton and Franconia/Springfield on the Fredericksburg line, and Burke Centre, Rolling Road, and Backlick Road on the Manassas line.

The county has many protected areas, a total of over 390 county parks on more than 23,000 acres (93 km2). The Fairfax County Park Authority maintains parks and recreation centers through the county. There are also two national protected areas that are inside the county at least in part, including the Elizabeth Hartwell Mason Neck National Wildlife Refuge, the George Washington Memorial Parkway, and Wolf Trap National Park for the Performing Arts. The Mason Neck State Park is also in Lorton.

The Reston Zoo is in Reston, Virginia. The National Zoo is located nearby in Washington, D.C.

The county maintains many miles of bike trails running through parks, adjacent to roads and through towns such as Vienna and Herndon. The Washington & Old Dominion Railroad Trail runs through Fairfax County, offering one of the region's best, and safest, routes for recreational walking and biking. In addition, nine miles (14 km) of the Mount Vernon Trail runs through Fairfax County along the Potomac River.

However, compared to other regions of the Washington area, Fairfax County has a dearth of designated bike lanes for cyclists wishing to commute in the region. On May 16, 2008, Bike-to-Work Day, the Fairfax County Department of Transportation released the first countywide bicycle route map. 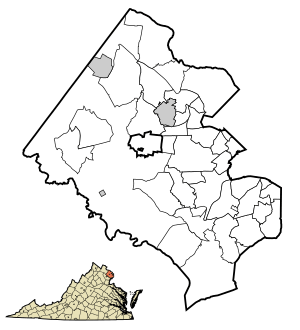 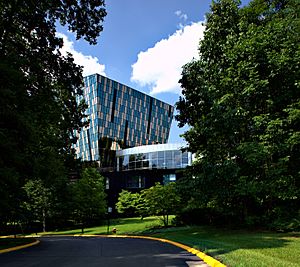 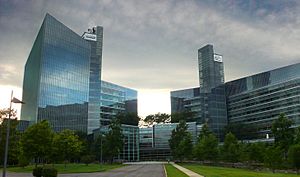 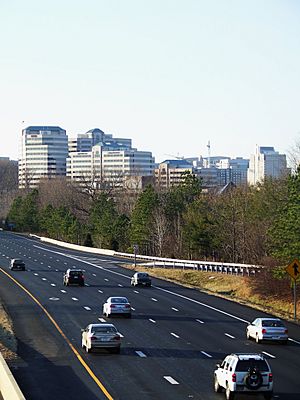 The independent cities of Falls Church and Fairfax were formed out of areas formerly under the jurisdiction of Fairfax County, but are politically separate, despite the status of the City of Fairfax as county seat.

It has been proposed to convert the entire county into a single independent city, primarily to gain more control over taxes and roads. The most recent such proposal was made June 30, 2009.

As of the 2000 census the thirteen largest communities of Fairfax County are all unincorporated CDPs, the largest of which are Burke, Reston, and Annandale, each with a population exceeding 50,000. (The largest incorporated place in the county is the town of Herndon, its fourteenth-largest community.)

The following localities within Fairfax County are identified by the U.S. Census Bureau as (unincorporated) Census-Designated Places:

Many of these areas have addresses in Alexandria, Falls Church and Fairfax City.

All content from Kiddle encyclopedia articles (including the article images and facts) can be freely used under Attribution-ShareAlike license, unless stated otherwise. Cite this article:
Fairfax County, Virginia Facts for Kids. Kiddle Encyclopedia.